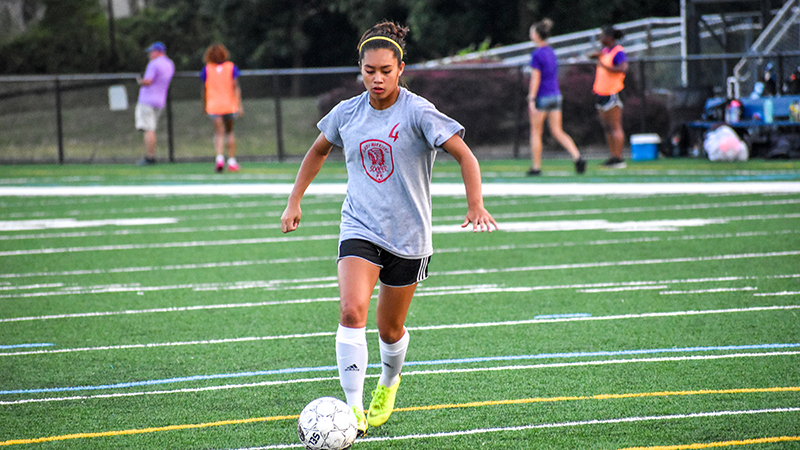 The Lady Warriors advanced to the Class 5 Region A championship game with a semifinal win over Menchville.

With a 1-0 victory over Menchville Tuesday, Nansemond River’s girls’ soccer team advanced to the Class 5 Region A title game.

Some will call it an upset, but the Lady Warriors don’t look at it that way. As the No. 6 seed, they knocked off both the No. 3 seed, and then No. 2 Menchville.

“They put all their energy they had into the game,” said Nansemond River coach Michael Swerda. “Menchville were a lot tougher than what we expected. With playing on a bigger field and going against Menchville’s speed at the top, it was definitely a dog fight.”

Nansemond River will face Hickory at Powhatan Field at 5 p.m. Friday for a shot at the Class 5 Region A championship. Both teams, no matter the result, advance to the state tournament.

Haley Russell scored the only goal of the semifinal match in the 34th minute, and from there the Lady Warriors’ young defense, along with their goalkeeper, was able to get the job done.

“I felt like we played very well out there,” Russell said. “Having the opportunity to finish for the team was one of the best feelings I’ve had. This couldn’t have happened without teamwork.”

In their last nine games, the Lady Warriors have won eight of their past nine games, with their only loss coming to Hickory, their opponent in the region championship.

In that last meeting, Nansemond River lost 4-1, but now that it has seen what Hickory has to offer, Swerda believes the team will be more prepared this time around – and more relaxed with a spot in the state tournament secured. Plus, the Lady Warriors had a chance to watch Hickory’s region semifinal win and believe that if they are smart on the back line, they can come out on top.

“We know where their strengths and weakness are, and we won’t be as shell-shocked as we were the first game,” Swerda said. “I think this game will be a lot closer than what people think.”

Swerda believes the team has been in playoff mode since the second half of the season, and they’re ready for what’s next.