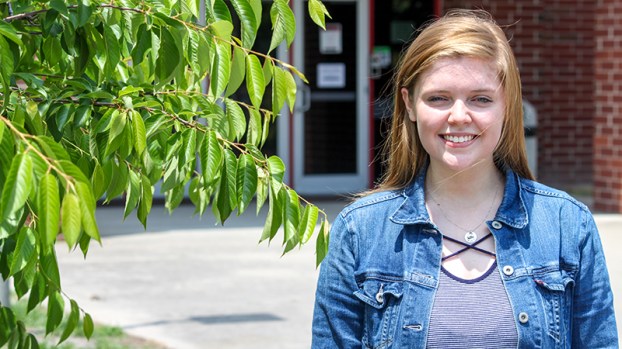 Mackenzie West, 18, is the valedictorian of Nansemond River High School. She will attend the University of South Carolina in the fall and plans to focus her studies on mathematics.

Being a part of Nansemond River High School’s Project Lead the Way program helped Mackenzie West hone in on her career track.

While West, who has been named the school’s valedictorian, enjoyed the engineering focus of her program, she learned that was not what she wanted to do for a living.

She wants to stay in a STEM field and focus on mathematics when she gets to the University of South Carolina in the fall.

“It actually made me realize it’s not what I want to do,” West said.

Still, it has all been good preparation for college.

“Meeting all these new people to start with, I feel like, will make it easier for me going into college because it’s not like something I haven’t done before, like adjusting.” West said. “I’ll be able to have experience with it, adjusting to new people and experiences.”

Her engineering teacher, Dawn Rountree, has been a big influence on her.

“Even though I’m not necessarily going into engineering, she’s always been a big supporter for all of us,” West said.

West, 18, just finished her capstone project, in which she and her partners had to solve a practical problem. In their case, they created a container for sauces to be secured in the car.

For most of the school year, her group has been doing research and testing on the project, documenting it all along the way. Her group turned in their project last week and gave their final presentation before a panel of judges Wednesday.

West has been among the top three students in her class since her freshman year, so it wasn’t totally unexpected for her to be named valedictorian, but it didn’t take away from her accomplishment.

“It was very exciting, because there was three of us that had been shuffling around (between) one, two and three since freshman year,” West said. “So to have it confirmed was very exciting.”

She said all three of them are friends and have been in Project Lead the Way together, but when she ended her junior year as number one in her class, she didn’t want to lose out on the top spot.

“It was added pressure just because of how close it was,” West said. “It was like, if I dropped at all in anything, I would have bumped down. We were so close.”

West said Senior Spirit Week was a big event for her in her high school experience because she had refined a small group of friends this school year and grew close to them.

Someone else she’s close to, her older sister, Jordan, is someone she’s looked up to throughout life. Her sister just graduated the University of Alabama.

“Just the way she handled herself in school, some semesters she was taking 18 hours and had two jobs and was in a sorority and a ton of stuff, and just the way she was able to keep it together, she did really well. … Just being able to see what she’s done, and think, ‘I think I can do that too,” West said.

Outside of school, West is a clogger with the Peanut City Cloggers, and she’s active at her church – Holland Baptist Church. She’s also been a part of the Beta Club, the National Honor Society and the Anchor Club.

If not for her parents’ support and encouragement, she might not have been in Project Lead the Way. It was a big change for her to be a part of the program. Not only did she live in southern Suffolk just east of Franklin, she would be attending an out-of-zone school, with just four students from her middle school, Forest Glen, coming with her to Nansemond River.

“It gave me a lot of new experiences and new people that I wouldn’t have had (otherwise),” West said.

As she reflected on her time at Nansemond River, she said graduation hasn’t quite hit her yet. Still, she hopes people will embrace the high school experience and all it can offer.

For her valedictorian address, she plans to focus on relationships – the ones she’s had throughout high school, and those of her friends and fellow seniors. She asked others in the Class of 2019 to reflect on their experience, and they told her that they’ll remember friends lost, as well as friends gained.

“I really wrote about relationships in high school and how they’ve influenced us and how they’ll influence our future,” West said.

Haley Adams will graduate from Suffolk Christian Academy this Saturday with a special distinction: she is the first student of... read more