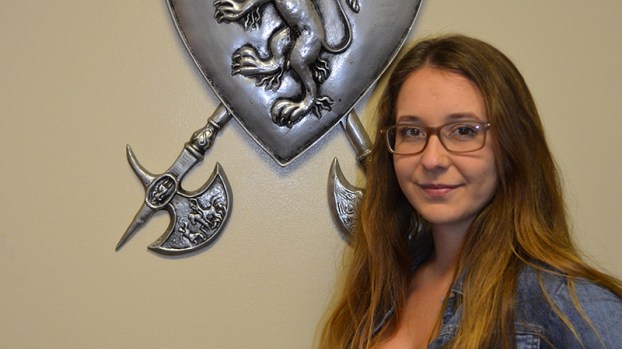 Kaitlyn Brittingham, 17, is one of the two co-valedictorians for Suffolk Christian Academy’s class of 2019. She plans to attend the College of William and Mary for her pre-med studies, with a major in either biology or chemistry and a minor in statistics.

Better days with friends at SCA

Kaitlyn Brittingham needed to write an essay for one of her college applications, specifically about a peer that had the greatest influence on her life.

Kaitlyn, 17, chose to write about Ethan Voight, 17, her co-valedictorian for Suffolk Christian Academy’s class of 2019. They’ve known each other since they were 4 years old in kindergarten, and while they haven’t always gotten along — both of them being competitive and all — they’re still close friends.

It only makes sense that they get to celebrate all of their hard work together as their school’s valedictorian duo.

“We’ve both worked really hard to maintain our grades and our really busy schedules,” Kaitlyn said. “The fact that we can both be proud of our accomplishments and be able to share that is just awesome. It’s an amazing privilege.”

Kaitlyn has managed six classes for her senior year at SCA, as well as four dual-enrollment courses between Paul D. Camp Community College and Tidewater Community College. She’s also been a team captain for volleyball and soccer.

She said that she loves a good challenge, a motivation that’s been fostered by her family.

“My family has really helped to challenge me in every area of my life (to become) a better person (and) a better student,” she said.

Kaitlyn’s favorite class was a toss-up between AP psychology or anatomy, because she loves learning about human behavior and how the human body functions as a whole. She said that she plans to attend the College of William & Mary for her pre-med studies, with a major in either biology or chemistry and a minor in statistics, most likely.

“It’s fascinating for me because I plan on going into the medical field, and when I’m going to deal with patients, I’m going to be dealing with their psychological health as well as their physical health,” she said. “Being able to see how the two go together to create a functioning human being is very fascinating to me.”

It’s also been very fascinating for her to see how SCA has changed since she first started in pre-school at 9 months old.

“I’ve been able to see the school grow and develop into the family and community that it is now, (and) being able to see the change — not just in the staff and the administration but in the students and their hearts — has just been amazing,” she said.

Ethan Voight, one of the two valedictorians for Suffolk Christian Academy’s class of 2019, has assumed several important roles at... read more