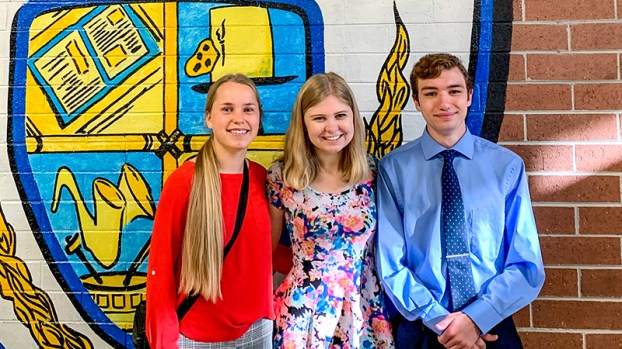 Annika Eng, Agnes Kleberg Andersen and Alex Hanna were the top placers in a recent essay contest sponsored by the Optimist Club.(submitted photo)

Alex Hanna, a senior at Smithfield High School, recently won the Optimist Club essay contest at both the local club level in Isle of Wight and the District 16 (Capital/Virginia) level.

This year’s essay contest was based on the theme of “When All the World’s Problems are Solved, is Optimism Still Necessary?” Hanna was awarded a $200 prize for his local win and received a $2,500 scholarship for the District win. In addition, the essay will be featured in Optimist International’s The Optimist magazine.

“Hanna did a wonderful job of articulating this year’s theme. He expressed himself well through the essay and deserved the honor of first place,” said Local Club President Michael Murphy. At the local level, second place, and $150, was awarded to Annika Eng, while third place, with $100, went to Agnes Kleberg Andersen. Both attend Smithfield High School.

Only first place was eligible for district competition.

The District 16 and the local Isle of Wight Club have been participating in the Optimist Essay Contest for a number of years. Other programs and service projects that the Isle of Wight Club is involved in include school track teams, 4-H Camp, Sundays @ 4, and other opportunities that directly support the county’s youth.

Optimist International is one of the world’s largest service club organizations with 80,000 adult and youth members in 2,500 clubs in the United States, Canada, the Caribbean, Mexico and throughout the world. Carrying the motto “Friend of Youth,” Optimists conduct positive service projects that reach more than six million young people each year.

To learn more about Optimist International, call 314-371-6000 or visit the organization’s website at www.optimist.org. To become part of the local club, call 334-4096.

Farmers Bank, a community bank founded in 1919 to serve farmers, businesses and families in Isle of Wight County and... read more