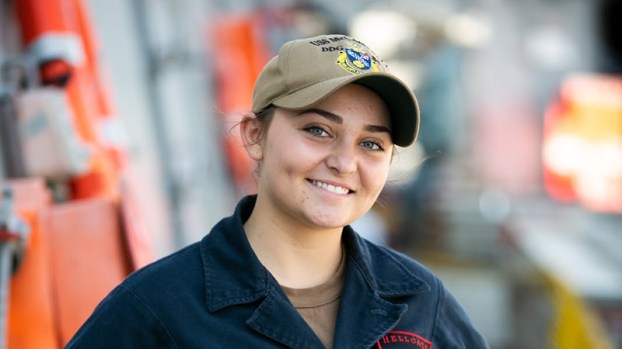 Seaman Meaghan O’Brien is a native of Suffolk and a 2016 graduate of Lakeland High School. She is stationed on the USS McCampbell. (Senior Chief Petty Officer Gary Ward/U.S. Navy)

Seaman Meaghan O’Brien, a native of Suffolk, joined the Navy because she was inspired by her grandfather, who also served in the Navy.

Now, one year later and half a world away at Fleet Activities Yokosuka, O’Brien serves aboard the Arleigh Burke-class guided-missile destroyer USS McCampbell, patrolling one of the world’s busiest maritime regions as part of the leading edge of U.S. 7th Fleet.

“This destroyer is very strict, and my first impression when I first got here, it was tough,” said O’Brien. “I think it will set me up for success in my Navy career.”

O’Brien, a 2016 graduate of Lakeland High School, is an operations specialist aboard the Yokosuka, Japan-based ship, one of several in its class forward-deployed to the region.

“I keep track of surface and air contacts,” said O’Brien.

O’Brien credits success in the Navy to many of the lessons learned in Suffolk.

U.S. 7th Fleet spans more than 124 million square kilometers, stretching from the International Date Line to the India/Pakistan border; and from the Kuril Islands in the North to the Antarctic in the South. U.S. 7th Fleet’s area of operations encompasses 36 maritime countries and 50 percent of the world’s population with about 50 to 70 U.S. ships and submarines, 140 aircraft and approximately 20,000 sailors.

“I haven’t been anywhere else, but what I know is that we are in the middle of the action, so I feel like there’s more opportunity to experience more of what the Navy is all about,” said O’Brien. “We get to do and see the things that others don’t get to do or see.”

With more than 50 percent of the world’s shipping tonnage and a third of the world’s crude oil passing through the region, the United States has historic and enduring interests in this part of the world. The Navy’s presence in Yokosuka is part of that long-standing commitment, explained Navy officials.

“The Navy is forward-deployed to provide security and strengthen relationships in a free and open Indo-Pacific. It’s not just the ships and aircraft that have shown up to prevent conflict and promote peace,” said Vice Adm. Phil Sawyer, commander, U.S. 7th Fleet. “It is, and will continue to be, our people who define the role our Navy plays around the world. People who’ve made a choice and have the will and strength of character to make a difference.”

Destroyers are warships that provide multi-mission offensive and defensive capabilities. They are 510 feet long and armed with tomahawk land-attack cruise missiles, Standard Missile-3 and newer variants of the SM missile family, advanced gun systems and close-in gun systems. Destroyers are deployed globally and can operate independently or as part of carrier strike groups, surface action groups, or amphibious readiness groups.

Their presence helps the Navy control the sea. Sea control is the precondition for everything else the Navy does. It cannot project power, secure the commons, deter aggression or assure allies without the ability to control the seas when and where desired.

Serving in the Navy means O’Brien is part of a world that is taking on new importance in America’s focus on rebuilding military readiness, strengthening alliances and reforming business practices in support of the National Defense Strategy.

“Our priorities center on people, capabilities and processes, and will be achieved by our focus on speed, value, results and partnerships,” said Secretary of the Navy Richard V. Spencer. “Readiness, lethality and modernization are the requirements driving these priorities.”

Though there are many ways for sailors to earn distinction in their command, community and career, O’Brien is most proud of reaching her milestones with her in-rate qualifications.

“I try to be the best I can,” said O’Brien. “I want to learn the most about my rate and ship. The more I learn about my job, the more people rely on me for an answer.”

As a member of one of the U.S. Navy’s most relied-upon assets, O’Brien and other sailors know they are part of a legacy that will last beyond their lifetimes contributing to the Navy the nation needs.

“I joined the Navy to help protect my country and make sure the rest of America is safe and free,” said O’Brien.