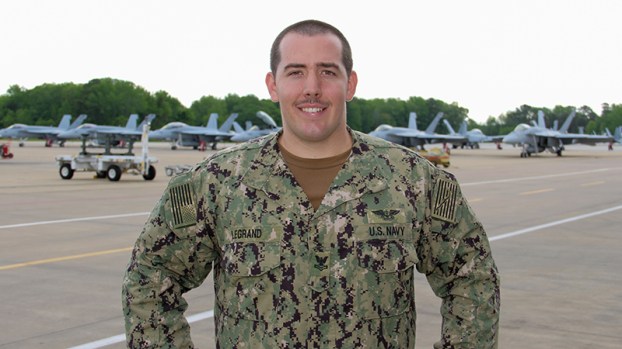 A 2009 King’s Fork High School graduate and Suffolk native is currently serving with a U.S. Navy strike fighter squadron that flies one of the world’s most advanced warplanes.

Petty Officer 2nd Class Nathan LeGrand is an aviation ordnanceman with the Gladiators of VFA-106, which operates out of Naval Air Station Oceana. A Navy aviation ordnanceman is responsible for loading the aircraft with missiles and bombs and handling ordnance when not attached to planes.

LeGrand credits success in the Navy to many of the lessons learned growing up in Suffolk.

“Me, I’ve always just taken it day-by-day, rolling with whatever comes your way,” said LeGrand.

Members of VFA 106 fly and maintain the F/A 18 Super Hornet, one of the most advanced aircraft in the world. The Super Hornet takes off from and lands on Navy aircraft carriers at sea and is capable of conducting air-to-air combat as well as striking targets on land. It is approximately 61 feet long, has a loaded weight of 51,000 pounds, and a max speed of 1,190 miles per hour.

Operating from sea aboard aircraft carriers, the Super Hornet gives the Navy the power to protect America’s interests anywhere, at any time. The versatile jet has the ability to destroy targets located hundreds of miles inland. Super Hornets are an all-weather aircraft used as an attack aircraft as well as a fighter. In its fighter mode, the F/A-18 is used primarily as a fighter escort and for fleet air defense; in its attack mode, it is used for interdiction and air support.

“Our priorities center on people, capabilities and processes, and will be achieved by our focus on speed, value, results and partnerships,” said Secretary of the Navy Richard V. Spencer. “Readiness, lethality and modernization are the requirements driving these priorities.”

Though there are many ways for sailors to earn distinction in their command, community and career, LeGrand is most proud of qualifying to supervise for safety when an ordnance team loads weapons.

“I’m responsible for the safety of the evolution. You need to be a petty officer second class or above,” said LeGrand. “I also have three Navy and Marine Corps Achievement Medals. One was for an inspection that we scored really well. It all means something.”

Serving in the Navy is a continuing tradition of military service for LeGrand, who has family members who have previously served. LeGrand is honored to carry on the family tradition.

“My father and older brother served,” said LeGrand. “They gave me advice and affected my decision.”

As a member of one of the U.S. Navy’s most relied-upon assets, LeGrand and other sailors know they are part of a legacy that will last beyond their lifetimes providing the Navy the nation needs.

“The Navy lets me present myself as a role model to my kids,” added LeGrand.

A Suffolk man facing a second degree murder charge in connection to a fatal downtown shooting in February has been... read more