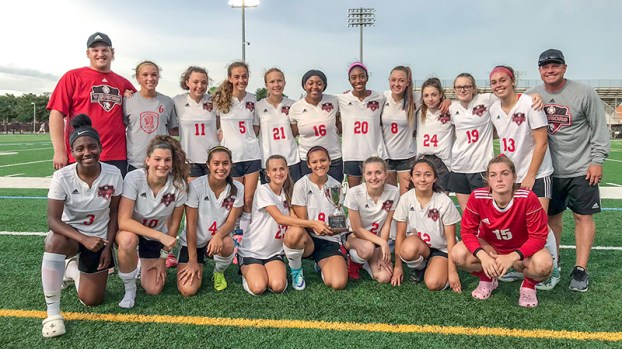 The Lady Warriors finished as runner-up in Class 5 Region A. They will take on Deep Run High School in the first round of the state tournament. (submitted photo)

The Lady Warriors are coming off of a strong region tournament run. As the No. 6 seed, they were able to upset the No. 3 and No. 2 seeded teams to reach the region championship game. In the championship game, they fell to Hickory High School 1-0, but it took extra time for Hickory to come out with the win.

“It was a great experience for us,” Coach Michael Swerda said. “We were in the game until the very end.”

Win or lose in the region championship game, Nansemond River earned a bid to Class 5 state tournament. It will all start Tuesday evening when Nansemond River goes on the road to take on Deep Run, who are the Class 5 Region B champions.

Swerda feels the team is confident heading into the tournament. Nansemond River has only two losses, which both came to Hickory, in their last 12 games.

“I think the girls are playing at the highest level we have played all year,” he said. “Deep Run is a good team, and if we play like we are supposed to, this game is going to be a lot closer than people think.”

Against Deep Run, the Lady Warriors want to use the same game plan they recently used against Hickory. They want to high press and disrupt Deep Run’s possessions. However, on the offensive end, the Lady Warriors know they have to take advantage of their opportunities. The goalkeeper for Deep Run is an NCAA Division I signee, and they know goals won’t come easy.

“If we do some of the things we did against Hickory and improve on them, I think we’re going to be in business,” Swerda said.

Nansemond River will be at Deep Run at 5 p.m. Tuesday. All Virginia High School League tournament games will be $10.