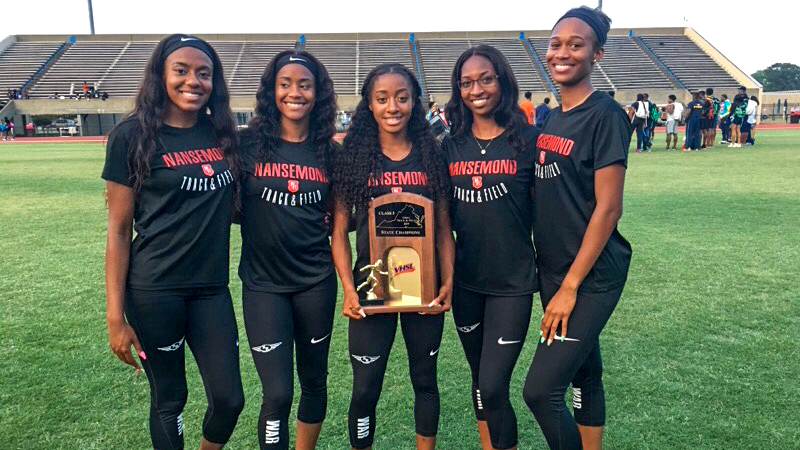 There was a mix of various emotions, from happy to sad and nervous, at Todd Stadium for Team WAR. Nansemond River won its sixth straight outdoor title, bringing the school’s total to 11 titles including indoor.

But the team took this event to the wire, winning by only a single point.

WAR won the Class 5 state title with a score of 66 to the second-place Bethel High School Bruin’s 65. For WAR to even be in contention, they had to come from behind and win. At one point during the meet, Nansemond River trailed by 27 points, which is quite an unusual position for the team.

With the 300-meter hurdle event on hand, Kori Carter took the state crown, and a couple more top-seven finishes gave WAR 15 points from the event.

From there, WAR competed in the 200-meter dash, picking up extra points to cut into their deficit. The final event of the meet was the 4×400 relay. Down nine points, all WAR had to do was win in order to win the state by only a single point.

Equivalent to a walk-off homer or a buzzer-beating three-pointer, the WAR ladies ran the 4×400 in a time of 3:49, edging out the second-place team, which finished 3:50.93. The all-senior group of Carter, Tre’Breh Scott-McKoy, Lauryn Freeman and Julia Burkley were able to put on a nail-biting performance.

“Those seniors we have are so experienced,” Coach Marco McKoy said. “I knew if it came down to it, those girls were going to come through. Our five seniors did a tremendous job just working our way back in the meet.”

“It felt like everything my teammates and I had worked for this whole year showed on the track,” Carter said. “Our coaches built us on performing when it really matters. Pressure turns into adrenaline for each and every one of us.”

Throughout the meet, Nansemond River been counted out. However, Team WAR knew it had the experience to lean on with a group of seniors that had been through almost all situations in their track careers.

“It was one of the most intense and nerve-wracking state meets I’ve ever competed in,” Freeman said. “The tension was definitely up to our necks, but we have learned and grown in the midst of pressure, so we know how to withstand it. Our tough times and our adversities helped us a lot.”

WAR will now shift its focus to the outdoor national meet.

Boyette, Lewis headed to next level