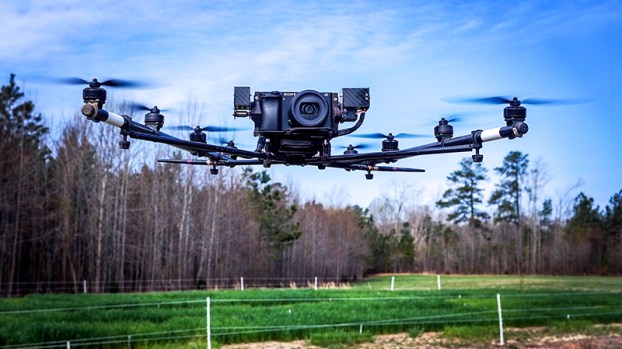 Drones in use at Suffolk’s agriculture research and extension center off of Holland Road will play a key role in farming’s future, according to researchers at Virginia Tech.

David Langston, a professor and director of the Tidewater Agricultural Research and Extension Center, said it has been using drones — also known as unmanned aerial vehicles, or UAVs — for at least the past four years that are equipped with remote sensors to determine how different plants respond to different stresses.

The Suffolk research center is part of Virginia Tech’s SmartFarm Innovation Network, which it describes as a decentralized network of interconnected centers around the state. University researchers and Virginia Cooperative Extension specialists and agents will partner with producers and commercial entities to develop, and put into use, a variety of technologies to increase efficiencies, resilience and the sustainability of agricultural and natural resources production systems.

“What we’ve been doing with UAVs is using remote sensors that the UAVs carry to help us see differences in plant response to different stresses,” Langston said. “That’s one of the main things that we’re doing now and (will) probably continue doing.”

This is information satellites gave them previously, but using the drones allows for better resolution to detect plant stresses more clearly.

“What we’re hoping to do is to be able to detect these different plant stresses and either with the light signature or the thermal signature that they give out, to be able to consistently and accurately detect the right types of stresses,” Langston said. “We’ve got to ground-proof that. Once we can do that, we can evaluate a lot of different varieties for drought stress.”

Langston said there are also plans to hire a precision agricultural specialist, which would be part of the SmartFarm initiative, to show growers more efficient ways to use technology that already exists. This person could also “weed through” a lot of companies with precision agricultural software and packages. The options are “kind of confusing the growers,” Langston said.

“We’re hoping that this person is going to be able to evaluate the different type of offerings and be able to tell growers what they need and the differences between all the different offerings that are already out there,” Langston said. “And maybe we can develop some things of our own that are specific to what we do here.”

One thing the Holland Road facility is looking at is the variable application of nematodes, or roundworms, to map them precisely in fields and only apply nematocide, a substance used to kill the roundworms, to areas where it’s needed using GIS satellite mapping.

Langston said there’s also some micro-irrigation work happening with cotton. He said they can adjust the irrigation system either on a laptop or smartphone.

The facility also has a spray drone that can apply pesticides and be more precise in doing so when growers cannot get to their fields. He said Japan and China have adopted such technology, while the United States is just starting to dabble in it.

“It’s certainly not something that can be applied to vast acreage, but we’re evaluating that technology,” Langston said. “There are some rules and different things that are going to have to govern commercial applications of pesticides using an unmanned vehicle. That creates even more questions for current pesticide laws.”

The SmartFarm network consists of Virginia Tech’s Blacksburg campus, the 11 agricultural research and extension centers, including Suffolk’s, and 108 cooperative extension local offices. It’s at these locations, according to university agricultural researchers, where new technologies are being developed and put into place.

“The SmartFarm Innovation Network is poised to leverage the university’s expanding talent pipeline, including the Innovation Campus,” said Virginia Tech President Tim Sands in a news release. “It is an example of how investments in talent and partnerships can be employed to accelerate development in rural locations around the state. Using knowledge developed by Virginia Tech to foster prosperity around the commonwealth is at the heart of our land-grant mission.”

Similar work is being done at the Eastern Virginia Agricultural Research and Extension Center.

There, its superintendent, Joseph Oakes, flies drones over grain crops to measure soil moisture and nutrient density to predict and examine the spread of a blight that affects wheat and barley, which researchers say will more accurately show disease resistance.

Sue Duncan, a food scientist and the assistant director of the Virginia Agricultural Experiment Station, led researchers exploring cyber biosecurity in the food system, from food production to the consumer. She said that awareness, knowledge, adoption and frequently evaluating cyber biosecurity plans and strategies are key.

“The cyber biosecurity is really one of those unexplored areas that we think is hugely critical to our bioeconomy to the state and the nation,” Duncan said. “As we do these SmartFarms, the goal is to use data and computer systems to find more information and use that in a way that gives us better guidance.”

She said that while cyber biosecurity is advanced, there are many stakeholders, including small farms, businesses and suppliers that either do not have access to the data sources or don’t have the ability to share data.

The Tidewater Agricultural Research and Extension Center, like the other 10 research experiment stations around the state, has a WeatherSTEM system to measure wind speed and direction, precipitation, temperature, humidity and solar radiation. There are also high-resolution cameras that record real-time imagery of current conditions and gives time-lapse visuals of weather patterns.

“The goal with the SmartFarm is, we’re trying to evaluate technology and show growers how it affects their bottom line,” Langston said.

The auditorium at Nansemond River High School went to the dogs on Monday morning. Therapy dogs from the Suffolk Humane... read more