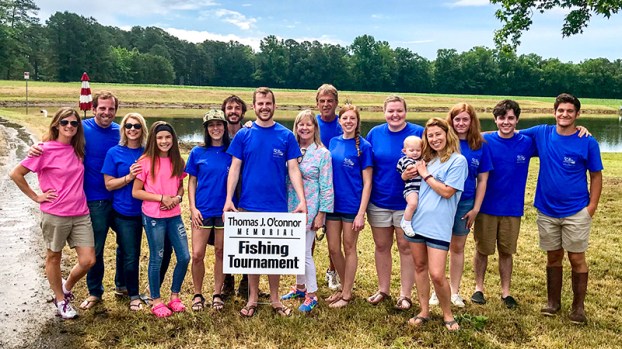 In spite of a late-morning thunderstorm, the Broken Oar Foundation still reeled in anglers on Saturday to help raise money for local Scouts and the Suffolk Lions Club at its 2019 Memorial Bass Fishing Tournament and Auction.

This was the tournament’s seventh year, and it raises money that allows the foundation to help local Boy Scout families pay for summer camps, uniforms and other expenses. The tournament was held at Johnson’s Gardens on Holland Road.

The Johnsons first began holding the event in memory of their departed loved one, Thomas J. O’Connor IV, who died in May 2013 at the age of 36. O’Connor was an Eagle Scout in Suffolk’s Boy Scout Troop 1 and an avid outdoorsman.

Fellow outdoorsmen competed in Saturday’s catch-and-release tournament. Competitors casted into six different ponds at the Johnson family farm, and they were judged based on the cumulative weight of the two heaviest fish per competitor.

The first-place prize of $250 was Jason Schramm, who actually tied with second-place winner Trenton Lee, who won $100. These two competitors both had cumulative weights of 4.9 pounds, but Schramm caught more fish that morning and because of that won the tiebreaker, according to an email from Jett Johnson of the Broken Oar Foundation.

Ryan Beale came in third place with a single 4.4-pound bass and won $50. First place for the youth category went to Connor Jennings.

The silent auction featured gift baskets, handmade crafts, local artwork and other favorites that contributed to the overall fundraising.

Between the tournament and auction, the Broken Oar Foundation raised roughly $6,000 and was able to donate $3,000 to local Scout troops, plus $500 for the Suffolk Lions Club. Members of that club have supported the event since it first started, and they volunteer to serve lunch at the event each year, according to Johnson.

Both the tournament and silent auction went “really well” despite the bad weather on Saturday, Johnson wrote.

“Our fund is now at roughly $90,000 and we are nearing our 2020 end-of-year goal of $100,000,” he wrote. “Though it is our plan to only keep growing … at $100,000, we know that we can likely exist in perpetuity providing annual sizable donations to the local Scout troops off of investment interest alone.”

Rainy day for cleaning the bay

About 75 volunteers managed to collect about 50 bags of trash for Clean the Bay Day in Suffolk before they... read more