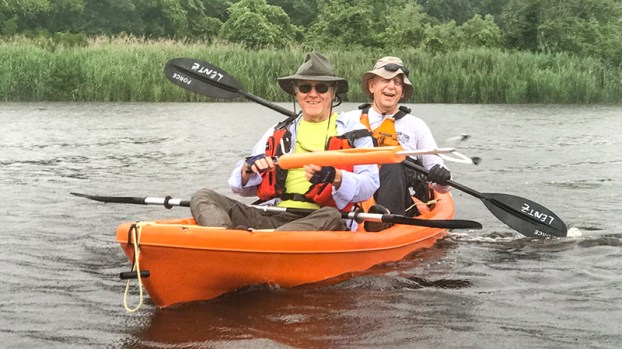 Kayakers Pete and Monroe in the Nansemond River during Clean the Bay Day in Suffolk on Saturday. (submitted photos)

Rainy day for cleaning the bay

About 75 volunteers managed to collect about 50 bags of trash for Clean the Bay Day in Suffolk before they were cut short by the rain on Saturday morning, according to Suffolk Litter Control Coordinator Wayne Jones.

Cleanup sites were organized throughout the city on Saturday for the 31st annual Clean the Bay Day, a regional waterway and shoreline cleanup sponsored by the Chesapeake Bay Foundation.

Boy Scout Troop 1 tackled litter on Murphys Mill Road. Suffolk Police and Suffolk Fire & Rescue got in their boats to collect trash inside the city’s waterways, along with several independent kayakers.

Farmers Bank volunteers cleaned up in the vicinity of Hillpoint Boulevard. Students from Suffolk Public Schools earned community service hours by picking up trash around the city, as well.

“We still had a lot of people come out, but we (just) got cut short because of the weather,” Jones said.

Across the region, about 3,500 volunteers gathered at nearly 200 sites and collected an estimated 45,000 pounds of litter, according to a press release from the Chesapeake Bay Foundation. The event was dedicated to those affected by Friday’s mass shooting in Virginia Beach, and moments of silence were held at many cleanup sites before the work began.

“This tragedy is heartbreaking,” CBF Hampton Roads Director Christy Everett stated in a press release. “Virginia Beach is the birthplace of Clean the Bay Day. Through the years, the city has been one of our most important partners in restoring our waterways. Our colleagues and friends in that building worked tirelessly for clean water. We dedicate this Clean the Bay Day to the victims of the Virginia Beach shooting.”