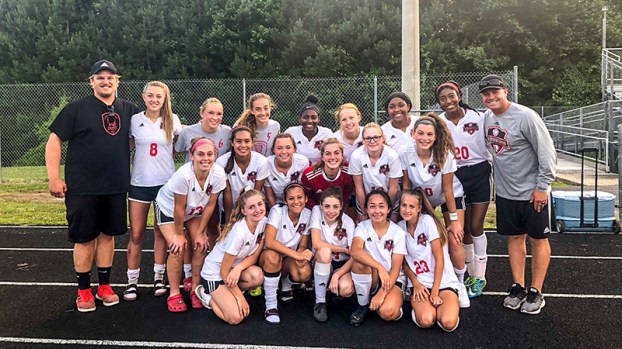 The Lady Warriors fell 3-2 in extra time to Deep Run High School, ending their season in the quarterfinals of the state tournament. (submitted photo)

Nansemond River and Deep Run both left everything they had on the field Tuesday evening as the Lady Warriors fell in a quadruple-overtime game. Deep Run, the host, went into the game with only one loss and was the recent Class 5 Region B champion. The Lady Warriors came into the game on a hot streak of their own, finishing up just short of a region title.

In the first half, both teams stalled out as both goalies did a good job of keeping each other off of the scoreboard. Both teams went into the first half tied at zero. In the second half, Nansemond River got things started by getting on the board first with a goal from Sarah Rhiel with 27 minutes left to play in the game. Deep Run answered with a goal of their own in just about three minutes to tie the game at one.

Late in the second half, a goal for Riley Goss put Nansemond River up 2-1. Unfortunately for the Lady Warriors, Deep Run answered in the waning seconds of the second half to tie the game at 2.

Three overtime periods came and went with neither team being able to finish. However, in the fourth overtime, Deep Run was able to seal the deal, giving them 3-2 win and a spot in the Class 5 state semifinals.

“It was a hard-fought game on both ends,” Coach Michael Swerda said. “We fought hard. We felt like we had a chance to win it at the end, but overall the girls played well. I don’t think Deep Run expected they were going to have that tough of a game.”

“When we look at the picture of the whole season, it’s something everybody can be proud of,” he said. “We had a strong senior class, and they were able to set the example for the younger players.”

This was Swerda’s first season at the helm for the Lady Warriors soccer program, and he is looking forward to a stronger second year.