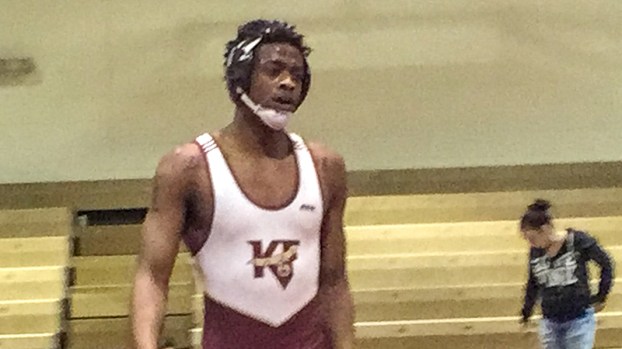 Bond to wrestle at Averett

King’s Fork High School wrestling program will be sending a wrestler to the next level. Kirk Bond Jr. committed to wrestle at Averett University in the fall.

Bond said wrestling in college was always a goal of his since the day he stepped on the mat and is excited about the opportunity.

“It seems like the perfect fit for me,” Bond said. “I think being a part of that program will help me as a wrestler and as a person off of the mat. I wanted to surround myself with people who share the same vision as me.”

Bond got introduced to wrestling as a freshman from former state champion Dennis Whitehead. However, while dealing with some issues, he wasn’t allowed to compete during his sophomore season. Bond knew he needed to change, so he worked on himself and went back to Coach Jason Dunaway for another chance to wrestle his junior season.

Bond credits his coach for helping him bounce back.

“I don’t look at him as just a coach but a mentor as well,” he said. “I felt like going through those growing pains were all worth it to end up where I am.”

Bond reached the state tournament during his junior and senior seasons and wrestled well there. At Averett, he’s looking forward to learning as much as he can his first year. Bond mentioned how he wrestled up in weight classes despite weighing less, and he felt good about what he was able to do against stiffer competition and hopes to continue that at Averett.

“I look forward to a great season,” Bond said. “I want to learn a lot. After talking with my coaches, they make the program feel like home to me.”