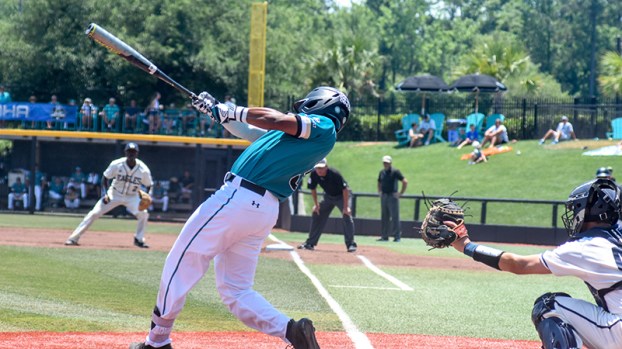 From the moment Rivers stepped onto the field as a freshman for Coastal Carolina, he experienced things many athletes don’t. He was able to be a part of an NCAA Division I championship team, as CCU took the title in 2016. During his freshman year, he made appearances in 20 games, helping the team on the way to the title.

CCU took on Georgia Tech in the 2019 NCAA tournament and fell 10-8 in a nail biter. CCU went on a run in the last two weeks of the season, including a conference title that gave them an automatic bid to the Big Dance. During that run, Rivers played some of the best baseball in his career, as he earned himself the Most Outstanding Player award of the conference tournament.

“Those last couple of weeks were nerve-racking,” Rivers said. “It was some of the most exciting baseball we had played all year. To be in the position we were in from the beginning of the conference tournament to the NCAA tournament with all those being elimination games was impressive for us.”

For his career, River started more than 100 games for CCU, which included more than 150 hits and 20 home runs. His last season he was a second team All-Conference performer. He was a part of multiple NCAA tournament appearances and conference titles.

“My career at Coastal has been nothing but an unbelievable experience,” he said. “I’ve learned a lot of things, grown as a player and accomplished a lot of things like championships and titles.”

Rivers said he didn’t know what to expect initially in college baseball, but with so many things accomplished over his college career, he surprised even himself. Going forward, Rivers has hopes of playing baseball at the professional level.

“Right now, I’m just waiting to see how things turn out,” he said. “It’s always been a dream of mine to play professional baseball, so we will see how everything turns out.”

Rivers makes his way back to Suffolk occasionally and enjoys himself while he is here. At Nansemond River, he was All-Region and All-State as a junior and senior. He was also the Ironclad Conference Player of the Year as a junior for the Warriors.