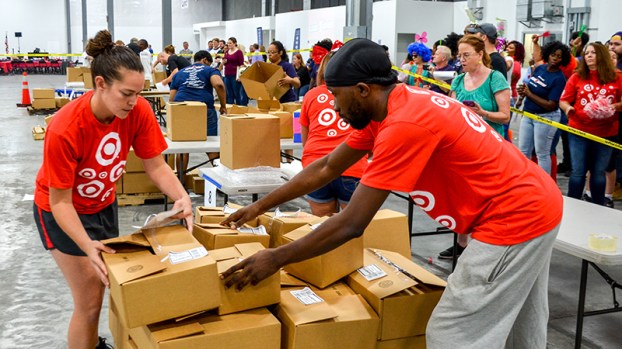 There was a competition in North Suffolk this week that was intensified by teamwork, team spirit in the form of bells, costumes and chants and plenty of cardboard boxes.

These boxes were carried to victory in the sixth annual Hampton Roads LogistXGames, which was held on Thursday at Bridgeway Commerce Center III on Harbour View Boulevard, courtesy of host sponsor Liberty Property Trust.

The Hampton Roads LogistXGames brought together 10 teams of local and regional companies from the logistics industry. Three members of each team competed in four unique challenges that were inspired by day-to-day logistical operations, plus a golf-putt challenge at lunch for bonus points.

The games showcase the importance of the logistics industry and recognize the region’s industry employers.

“We’re doing so well because of you,” said Suffolk Assistant Director of Economic Development Gregory Byrd. “We’re so fortunate to have manufacturers, logisticians, transportation companies, that have made Suffolk home.”

They also give credit where credit is due: the employees.

“We’re all here because we love logistics, and we love what all of you employees do, working hard for your companies,” said Lang Williams, senior vice president at Colliers International and LogistXGames co-founder with Scott Flanders, import RDC manager at Ace Hardware.

The crowds were dressed in team colors and varying amounts of flair: T-shirts with company logos to go with more exotic hats, sunglasses and bright-colored leis, plus bells that clanged along with a chorus of cheering and chanting.

Trios of logistical employees faced each of their challenges with these bells and whistles of support from their teammates, starting with the Pallet Puzzle Sprint. They raced against the clock to build 32 boxes that were labeled, sealed and stacked safely on top of a pallet on the warehouse floor.

Each team had a box that was specially decorated in advance, inside of which were fragile bottles of liquid. Each team filled that box with packing peanuts, paper and bubble wrap — but they had to choose only two out of the three materials to keep their bottles safe and secure.

Their consideration for their fragile contents would be put to the test later. First, they had to build, tape, label and stack with haste.

“It was an adrenaline rush because we were pressed for time,” said Devin Vonbehren with Target, after she and her crimson-clad teammates finished their stack. “It was fun though. We have a good team.”

Next up, the teams weaved their box stacks through the Pallet Jack Relay. At the sound of the horn, one team member used a pallet mover to guide the precarious stack on a serpentine path around obstacles, while at the same time being careful not to lose a box.

Then the teammate on the opposite side received the pallet mover, parked the box stack in a tight space quickly, then got it moving again to finish the circuit back to the starting point. Lastly, teams wrapped tape around their stacks six times to finish the challenge.

That wrapping came off for the PeakLogix Pick/Pack Hurdle challenge, in which each team got a long list of Stock Keeping Unit codes, including those that matched labels that were put on their boxes in the first challenge.

Their objective was to find their labels on the list and place them on the correct warehouse rack shelves in front of them. But it was a very, very long list of SKUs.

“Every single label is on that list, and it tells you where to put the box,” Williams told the team captains. “But there’s 32 labels and there’s like 300 SKUs listed, so you’ve got to find them.”

The hurdles came when they had to run and occasionally leap to get the boxes on the higher shelves. Michael Tyree with QVC described it as both mentally and physically exhausting, between the non-stop running and figuring out where each box belongs.

It was fitting, then, that Tyree wore a headband with bull horns for the event.

“It’s like being a bull running in a china shop, so I figured it would be appropriate,” he said.

The last challenge of the day was for their carefully-packed glass bottles. Dubbed the Box Put challenge, teams chose their strongest members to toss their boxes of fragile containers as far as they could.

They were judged by their distance thrown and penalized for broken bottles, which was made obvious by how their boxes leaked after landing.

Before they were airborne, however, these specially decorated boxes were judged. Target’s bright-red box that sat on a toy fire truck with a tiny-toy Bullseye, Target’s dog mascot, won this year’s decorative box contest.

Target team co-captains Haley Diedrick and Katie Bray agreed that their fellow employees look forward to bringing their loud, raucous spirit to this event every year.

“Bringing all of that spirit is a big part of why all of our team members enjoy it,” Diedrick said.

Target won first place to become the champions of the 2019 Hampton Roads LogistXGames. At the end of the day, the spirited teamwork of these Bullseyed-employees carried them to a winning trifecta.

The event had nearly 30 sponsors this year and raised $20,000, the proceeds of which will go towards workforce development scholarships at Paul D. Camp Community College and Tidewater Community College.

“We love logistics,” Williams said. “This is why we organize this event. It’s important for our country, for our state, for our region and for our port, and there’s a lot of great supporters here that make this happen.”

The fundraising goal for LogistXGames in Virginia this year is $50,000. Visit logistxgamesva.com for more information.

On June 6, 1944, approximately 160,000 Allied troops crossed the English Channel and landed on the coastline of Normandy, France.... read more