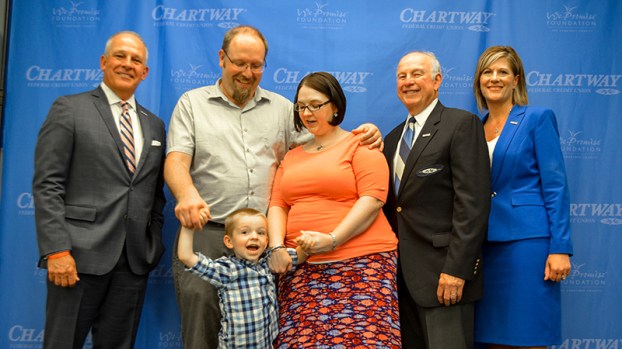 Chartway Federal Credit Union joined Suffolk city officials in a ribbon cutting on May 29 for its new Obici Place branch on North Main Street. It was also a joyous Wish Proclamation for a brave 4-year-old boy, done in partnership with Make-A-Wish Greater Virginia.

This new Chartway Federal Credit Union branch was constructed in the Obici Place complex with “modern, inviting and engaging member spaces” and Direct Teller technology, according to the press release. It marked the credit union’s return to the city of Suffolk.

It was also about 4-year-old Parker Lovingood and his dream vacation that was made real thanks to a donation from Chartway’s We Promise Foundation and the work of Make-A-Wish Greater Virginia.

Karen Lane, executive director of the We Promise Foundation, said it’s been an honor to partner with Make-A-Wish.

“Throughout the past 10 years, Chartway’s We Promise Foundation has granted more than $780,000 to Make-A-Wish Greater Virginia to bring joy, hope and smiles to children like Parker,” Lane said. “We recognize the importance of a wish come true for these young heroes and the role it plays in helping them gain the fuel they need to continue fighting their illnesses.”

Kristy Lovingood gave birth to her seemingly healthy twin boys, Parker and Grayson, in 2014. But shortly after Parker was born, he was diagnosed with a rare medical condition called rheumatic aortic stenosis.

“It was at the cardiologist office that it was discovered that Parker was very sick and had multiple life-threatening heart conditions,” Lovingood said. An ambulance took Parker to Children’s Hospital of the King’s Daughters. He was just 2 weeks old.

He had his first open-heart surgery when he was 17 days old, and the operation had a mortality rate of 17 percent, according to Lovingood. It wouldn’t be his last, either.

Lovingood joined online support groups for mothers whose babies were also affected by congenital heart defects. She became attached to these families, she said, and when one of these families lost their child, the reality of her greatest fear seemed that much closer to her home.

“I remember one individual in particular saying, ‘What’s going to happen, will unfortunately happen, but there’s one thing you can do: make memories,’” she said.

That’s what Lovingood set out to do. She applied to Make-A-Wish for Parker, and on Jan. 12, 2018, she was notified that he was eligible for the program.

Their family started to plan for the trip later that spring. Parker’s choice was Disney World, and the experience didn’t disappoint.

The attractions were amazing, Lovingood said, and everyone made them feel like celebrities. Parker even got his first hug from Mickey Mouse.

“We made some incredible memories, and best of all was spending our time together as a family,” she said, including her husband, Brian Lovingood, her mother, her parents-in-law, Parker and Grayson, and daughter Abigail. “We laughed, we cried and (we) smiled more than we all have in a long time.”

Parker remains a wild, curious and adventurous child, she said. He’s endured two more open heart surgeries in his life, including an aortic valve replacement, and will require more open-heart surgeries as he gets older, Lovingood said.

But Parker and his family will continue smiling and making happy memories.

“We don’t know what the future holds, but for now, we will continue making memories,” she said.

On June 6, 1944, approximately 160,000 Allied troops crossed the English Channel and landed on the coastline of Normandy, France.... read more