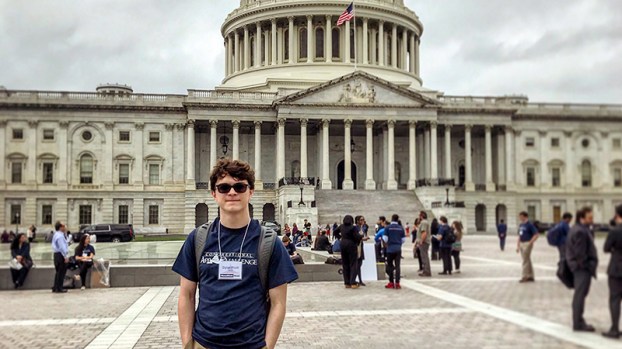 Nansemond River High School graduating senior Dylan Pruitt was one of the 2018 Congressional App Challenge winners that visited Capitol Hill for “#HouseOfCode” on May 9.

Graduating Nansemond River High School senior Dylan Pruitt was one of more than 250 winning students that demonstrated their unique applications during “#HouseOfCode” in Washington, D.C. on May 9.

The event was a celebration of the 2018 Congressional App Challenge winners. The purpose of the challenge is to encourage middle school and high school students across the country to learn coding and inspire them to pursue careers in computer science.

“Every year we challenge students in our districts to create and submit their original apps for a chance to win the Congressional App Challenge,” according to congressionalappchallenge.us. “Each challenge is district-specific. As U.S. Representatives, we publicly recognize our winning teams, and each winning app may be put on display in the U.S. Capitol Building for one year.”

#HouseOfCode kicked off on the morning of May 9 with a welcome session hosted at the Capitol Visitor Center Auditorium, where leaders from Congress, the administration and the private sector told the students to pursue computer science careers and “take charge in leading this country to the forefront of STEM development,” according to congressionalappchallenge.us.

This was followed by a sponsor and partner expo in the Rayburn House Office Building Foyer, during which students connected with sponsors, partners and community organizations to discuss pathways to STEM careers.

The 250-plus Congressional App Challenge winners then gathered in the Rayburn Banquet Rooms for their app demos. This featured students from 130 congressional districts and more than 40 states and territories, and more than 100 members of Congress attended to show their support.

For the challenge, Dylan submitted an app called “Heroku MUD,” which Dylan described as a multiplayer game. But the app that he actually displayed during the event was another piece of his work called “Scavenger Hunt.” He asked to display Scavenger Hunt because it was his capstone project for school and used some of the same technology as Heroku MUD, he said.

It’s meant to get people out of the house and into their local parks by allowing users to use barcodes found on signs to pull up more information about local wildlife.

“I like to go outside and like to program,” Dylan said, “so I thought I could make an app that could motivate other people to go outside.”

After he graduates this year, Dylan plans to attend Christopher Newport University to study computer science.

Virginia Congressman Donald McEachin (D-04) met with Dylan during the event and was impressed by the young man’s work.

“Virginia’s fourth congressional district was well represented by Dylan Pruitt in the Congressional App Challenge,” McEachin stated in an email. “His app was innovative and unique, and we are so proud of him. Competitions such as this are a great reminder of the importance of supporting STEM education in schools to equip our students with the skills they need to succeed in a rapidly changing world.

“I cannot wait to see what Dylan does next, and I look forward to seeing all the great entries from our district in next year’s Congressional App Challenge.”

The southeastern city of Suffolk is under a flash flood warning until 7 p.m. The National Weather Service in Wakefield... read more