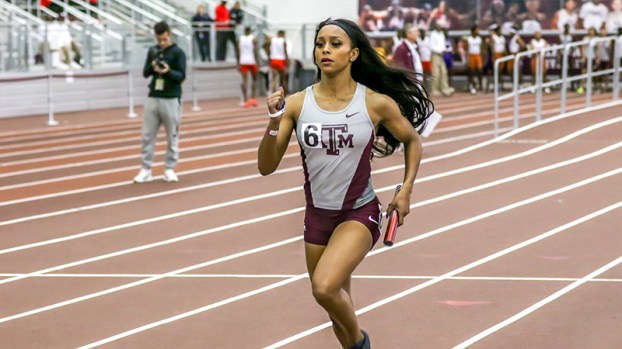 The Texas A&M University women’s track and field team finished fourth as a group in the NCAA Outdoor National Championships. During the meet, TAMU had some notable performances, some of came from Richardson. One of the most notable was the 4×400 relay event in which TAMU ran a time of 3:25.57, taking gold.

Richardson ran the anchor leg in a time of 50.83, bringing it home for TAMU. Richardson said it was a tough race. As a sophomore, Richardson looks to be finding her groove and is continuing to get better with the Aggie program.

“Coming after the 400m, it’s always tough to run the 4×400, but we train for it,” Richardson said. “It’s mentally tough, and knowing this level of competition, every anchor is an elite 400m runner. It could have been anyone’s race. This was the first time we ran this group together. Everyone executed their leg and ended up the way it was supposed to be.”

Richardson also ran in the 400-meter individual event, where she placed seventh.

Since transferring from Ohio State University, the former Team WAR standout is starting to come into her own. During the outdoor season alone, Richardson earned a silver medal at the Southeastern Conference Championship meet while also helping anchor the 4×400 team to school record times.

After graduating in 2017, Richardson had chosen to run at Ohio State. After a tough freshman season, Richardson felt like she needed a change. She asked for her release from OSU, reopening her recruitment, and decided to join TAMU to be closer to her family.

At Nansemond River, Richardson was a state title winner and a national champion. During her senior season, she had an indoor state performance for the ages, taking gold in four events. She was also a part of the USA Track and Field Junior Championship teams, helping take home gold in the 4×400 in the Pan America Junior Championships in Poland.

A pair of Team WAR standouts, Brene’ Donaldson and Tre’Breh Scott-McKoy, will take their talents to the same school. Over... read more