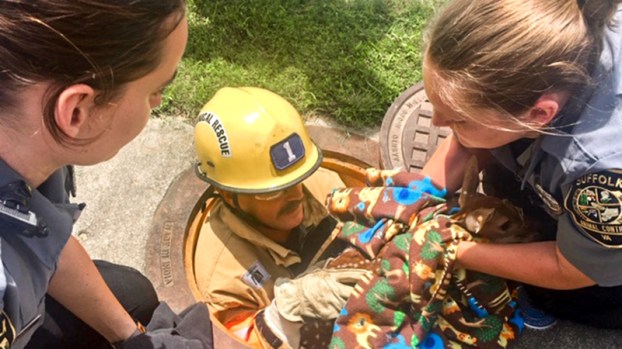 A citizen called about the fawn stuck in the drain in the 1100 block of White Herons Lane in the Herons Pointe neighborhood off Pitchkettle Road, according to a city press release.

The technical rescue team extricated the fawn at 11:15 a.m., and it was turned over to Animal Control officers on scene, the press release stated.

In a video released by the city, an Animal Control officer can be seen wrapping the fawn in a blanket printed with lions, giraffes and elephants as soon as a firefighter hands the young deer out of the drain.

Suffolk Animal Control will coordinate with Wildlife Response Inc. to set up transport so the fawn can be rehabilitated, the press release stated.

A Suffolk man has been arrested in connection with a Tuesday incident at Southampton High School. Jaden Phillips, 18, has... read more