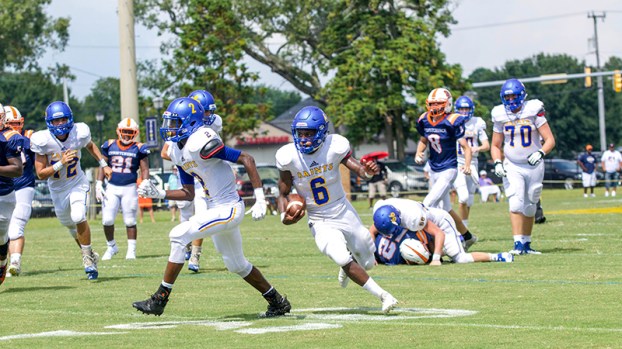 Nansemond-Suffolk Academy’s George Pettaway is garnering a high level interest in two sports from multiple schools. He recently pulled in his first football offer from the University of Virginia. (Jeffrey Dailey Photo)

As a rising sophomore at Nansemond-Suffolk Academy is garnering a lot of interest on the recruiting circuit.

NSA two-sport standout George Pettaway’s recruiting process is starting to heat up for him. On both the football field and basketball court, Pettaway has shown exceptional ability, which has caught the eyes of a few college programs in both sports.

Right now, in the midst of his football recruiting, Pettaway has pulled in an offer from the University of Virginia. He has also heard from the likes of Virginia Tech, Wake Forest, North Carolina State University and Old Dominion University. At running back, Pettaway has been able to stand out for NSA and in the Hampton Roads area.

“The whole process has gone well for me,” he said. “I’ve just been working hard and preparing myself, so when the opportunities do come, I’m ready. Just picking up an offer from UVA is incredible, and I couldn’t thank my family and Coach Mike Biehl enough.”

Pettaway is taking things as they come. When it’s football season, he is focused on that, and when it is basketball season, his focus is there. He constantly reminds himself that whatever the sport is, he wants to be dedicated to his craft.

“Without hard work, I won’t be picking up any more offers,” he said. “With the work I put in day in and day out, I’m confident that good things will keep happening for me. I know I can only control what I can control, and that’s working hard in the classroom and outside of it.”

Right now, Pettaway is in the midst of preparing for his sophomore year, wanting to get better than ever. After a hot start last year, an injury derailed the latter part of Pettway’s season; however, he is healthy and ready to make his way back to the field.

On the basketball side of things, Pettaway has gotten interested from Division I schools, already having picked up an offer from Hampton University. At the moment, Pettaway just wants to focus on enjoying the process of hearing from schools in both sports, he knows if he continues to work hard, everything else will take care of itself.

“I’m just focusing on being the best me, and the rest will take care of itself,” he said. “Later down the road, I’ll figure out where I need to be.”