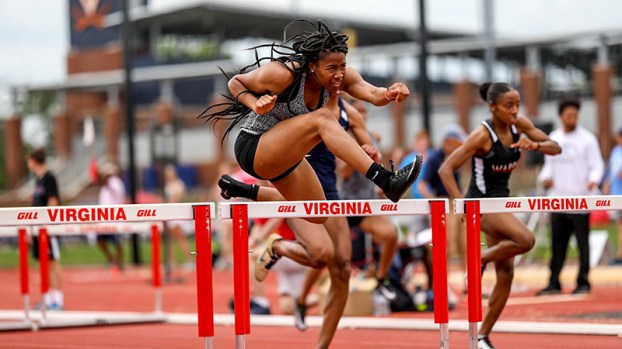 The success of Team WAR track and field has been no secret over the last seven years. Over that time, the Lady Warriors have accumulated 11 state titles with both indoor and outdoor, including their most recent two weeks ago. During her last official high school outdoor state meet, Carter strung together three state titles, including two in hurdles and one in a relay.

“It was amazing to cap off my senior year with another state title,” she said. “It felt like everything my teammates and I worked for this whole year showed on the track.”

The 11 state title (sixth straight outdoor) didn’t come easy. Nansemond River had been nearly out of contention for the whole meet. However, a big comeback in an overall team effort helped propel Nansemond River to a one-point win over the second-place winner. It came down to the 4×400 relay, which Carter was a part of, to win the meet. Since it was the final event of the meet, it was equivalent to a buzzer-beater in a basketball game.

“We had never been down so much so far into the meet like that,” Carter said. “We worked so hard and stayed poised.”

Looking back on her senior season, Carter felt it didn’t quite go how she wanted but didn’t stress about it. She finished with five total state titles and two team titles. Even though the outdoor season was a little rocky, as she described it, she felt she accomplished everything she wanted to.

“I felt like I closed out my high school career the way God wanted me to,” she said. “I felt like I definitely accomplished most of my goals.”

When preparing for her senior campaign, Carter wanted to come into this season breaking records. She wanted to put her name in the record books and have people remember her name for everything that she did. However, at the same time, she wanted to make sure she didn’t put too much stress on herself trying to accomplish the things she had set out to accomplish. Carter specializes in hurdles, and because of a clear mind, she has been able to have the success she’s had.

A support system is everything in doing anything, and Carter is grateful for hers. Her family inspires her as they travel to every track meet, no matter the distance.

“They have kept me going the last four years,” she said. “I don’t know where I would be without them.”

Carter will be taking her talents to Clemson University in the fall. She was heavily recruited by many NCAA Division I programs.