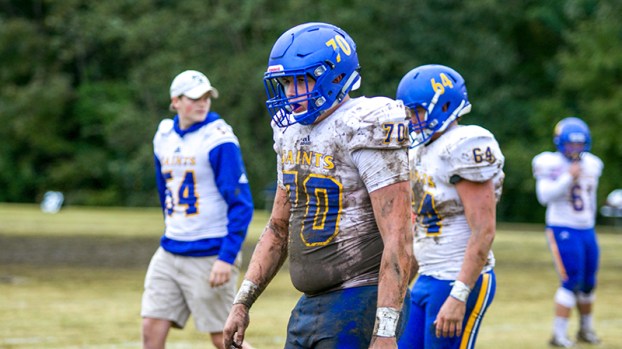 Griffin Duggan has been going to Division I camps, receiving high interest from top schools for his football skills. He currently has two NCAA Division I offers. (Jeffrey Dailey Photo)

Rising Nansemond-Suffolk Academy junior Griffin Duggan has raised his profile on the college camp circuit.
Duggan, a heavily sought-after offensive lineman, has been getting his fair share of interest from college programs. As it stands today, he has two offers from the University of Virginia and Virginia Tech, which he picked up last year. However, Duggan is steadily trying to raise his profile as he travels to showcase his talent.
He has been to Clemson University and the University of Pittsburgh, as well as Wake Forest and North Carolina State, to compete in camps. Coaches have also come to NSA to visit with Duggan as well.
“I’m just continuing to get as strong and as good at my position as I can,” he said. “I get a chance to go to these camps and show what I’m capable of in front of these coaches.”
Even though Duggan has a nice amount of attention on him from different programs, he wants to be focused on the coming season ahead. As a sophomore, he helped lead the Saints to a state tournament bid in which NSA had a top-two seed. The season didn’t end the way they wanted it to; however, he is excited about what the team has returning.
“This junior year is just going to be huge in general for me,” he said. “I think we have the team and players to be very successful this year. We have had active participation in the offseason.”
Last season, Duggan was an All-Conference and All-State selection. He knows it’s important to trust the process and not stress about anything.
“I am blessed to be in the position I am in,” he said. “I believe if I continue to get stronger and work harder, good things will continue to happen for me.”

Stringer preparing for breakout at ECU

In his second year in the program, Gerard Stringer is hoping for a breakout season with the East Carolina University... read more