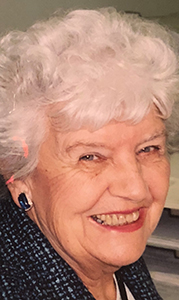 Sarah Leigh Jones died June 13, 2019, at home. Sarah Leigh was born in Whaleyville in Nansemond County, June 27, 1925. She was predeceased by her husband, James C. Jones, former mayor of Holland; her daughter, Victoria Leigh Jones; her parents, James Clement Russell and Ethel Draper Russell; and her brother, James Clement Russell Jr. She is survived by her son, Russell Turner and his wife, Charlene; daughter, Carla Ann Jones; and grandchildren, Kelly Turner Zarrilli and her husband, Joey, and Lee Turner and his wife, Desiree. She is also survived by great-grandchildren, Zach and Maxx Zarrilli.

Sarah Leigh received an associate degree in business administration from Mary Washington College. Her many activities include past president and a 50-plus-year member of the Holland Woman’s Club, past president of the Holland Community House Corporation, 50-plus-year member of the Holland Ladies Bridge Club, and co-chairman of the Initiative Steering Committee for Improvements in Holland. Sarah Leigh was a charter member of the Southside District International Association of Administrative Professionals and is past president of the Pilot Club of Suffolk. She was the first woman to serve as chairman of the Suffolk Red Cross Board and also served on the Riddick’s Folly Board and the Suffolk Tomorrow Committee. She was also a Suffolk Red Hatter.

For a total of 25 years, Sarah Leigh served as secretary at Holland High School, Forest Glen High School and Nansemond-Suffolk Academy. After retiring, she served as an administrative assistant in the General Assembly in Richmond for 22 years, serving under Sens. Nolen, McFarland, Miller, Schewel and Lambert, as well as Commonwealth of Virginia Senate Clerk Susan Schaar.

Community involvement was important to Sarah Leigh. One of her favorite activities was the  chaperone for the Peanut Festival Queen and Court for 10 years, where she was known as “Miss Manners.” Before coming to Holland, Sarah Leigh was the choir director and organist for Whaleyville Methodist Church. As a member of Holy Neck Christian Church, she served as the organist and choir director. She also  was a member of the Women’s Fellowship, Youth Fellowship Director, Music Committee member, Conference Parliamentarian, and Ladies Sunday School Class teacher.

Clothes and fashion were also important to Sarah Leigh. She worked for Denison’s Dress Shop in Suffolk and Ann’s Dress Shop in Waverly and moderated many fashion shows. In 1954, she was selected as one of the 10 best dressed women in Suffolk.

The family extends its deepest appreciation to her caregivers, Janet, Rhonda, Mary Ann, Carolyn and Marie. Heartland Hospice, particularly Rina, prepared all of us for this day. As much as she loved them, in lieu of flowers, please consider donating to The Children’s Center (www.childrenscenterva.com).