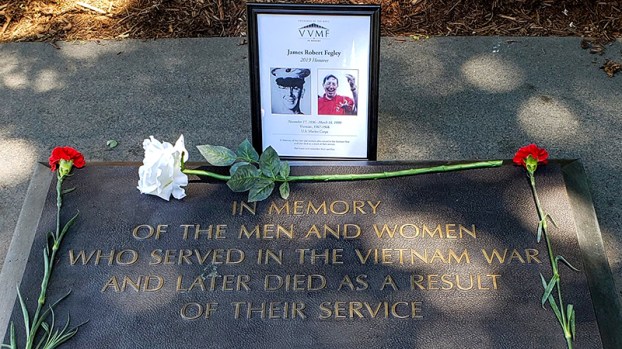 Suffolk residents Cindy and Stuart Fegley, along with their 21-year-old son Christopher, on Saturday joined thousands of others gathered at the Vietnam Veterans Memorial in Washington, D.C.

This program honors those who returned home from Vietnam and later died as a result of their service. Since the Vietnam War ended, thousands of Vietnam veterans have died each year due to Agent Orange exposure, Post Traumatic Stress Disorder and suicide, cancer and other causes related to their service.

This year, 534 veterans were honored during the 2019 In Memory Ceremony. More than 4,100 veterans have been added to the In Memory Honor Roll since the program began, which can be viewed online vvmf.org/Honor-Roll.

The Fegley family was at the ceremony to read the name of Stuart’s late father, James Robert Fegley, who served during the Vietnam War in the U.S. Marine Corps.

Cindy Fegley stood with her husband and her son to read her father-in-law’s name and share some remarks. She saw a whole swath of different people read names and remarks on Saturday — service members, family members, friends and volunteers.

She wrote remarks to read herself, but just a few minutes before their turn came, her husband Stuart chose to speak instead.

“My husband actually read it,” Cindy Fegley said in a phone interview on Monday, “and it wasn’t until a few minutes before we went up that he made the decision that he felt he could do it.”

Fegley said that it was important for her husband to acknowledge that it was his father that he was honoring. It was Father’s Day weekend, and he needed to speak for his. father

“He has been choked up about a lot of things this past weekend, with it being Father’s Day and all,” Fegley said. “It was both cathartic for him and emotional for my son and I, because my husband was able to do it.”

His responsibilities during his service grew from stenographer to personal administration chief, where he worked for Lt. Gen. L.E. Brown.

“Jimbo was held in such high regard that he had to wait until his boss was away before dropping his retirement papers,” according to his online Honor Roll entry.

He earned a number of awards to go along with the respect of his peers and superiors, including the National Defense Service Medal, Armed Forces Expeditionary Medal, Rifle Sharpshooter Badge, the Republic of Vietnam Campaign Medal with Device, Vietnam Service Medal, Presidential Unit Citation, and Vietnam Cross of Gallantry with Palm.

Jim took on a variety of jobs after his military retirement, including at the DEA, where he ultimately retired.

He enjoyed fishing, especially fly-fishing on the Rappahannock, and he loved to take his small bass boat out on Lake Anna and other local ponds and lakes.

“He was very welcoming to me as a member of the family and was very interested in what my husband (Stuart) was doing,” Cindy wrote in an email, referring to Stuart’s 20-year career in the Air Force, “and in having the family close to him.”

Jim lived in Fredericksburg but would make time to visit and be present for “things that mattered,” she said. He especially enjoyed being with his five grandchildren.

Stuart’s Air Force career would often put him and his father on “opposite ends of the world,” but there was time towards the end of Jim’s life for the family to be together, Cindy said.

“I think in some ways he was trying to make up for the time that he missed,” she said.

In 1998, Jim discovered a lump in his throat. He was diagnosed with large cell carcinoma of the hypopharynx. Neutropenia, which developed due to the chemotherapy treatment of his cancer, ultimately brought on gram-positive sepsis. He died on March 14, 1999, at the age of 62.

Cindy said Jim never liked to talk about the war, like many other veterans, and that he didn’t serve for the recognition.

“For Jim, he wasn’t looking for any kind of recognition,” Cindy said.

He especially didn’t want “recognition for recognition’s sake,” she wrote in an email. For instance, Jim served during the Korean War, but wasn’t in Korea during the conflict. He could have taken credit for service there by including it on his headstone, but didn’t.

“He chose not to include it, as it was not something (that) he felt he had earned,” she wrote.

Jim wouldn’t have wanted the ceremony this past weekend for himself, she wrote, but he would have appreciated the honor shown to his fellow service members.

“He was a strict father, a reliable provider for his family, a loyal friend and a patriot,” she wrote.

Sushi Aka has refreshingly exotic tastes

Patrons of Japanese cuisine have been going to Sushi Aka in downtown Suffolk for years, except for a brief... read more