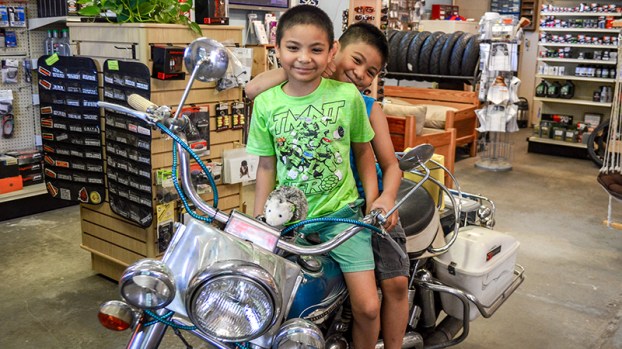 Siblings Gabriel Esmalla, 10, and Jediah Esmalla, 8, sit on top of a 1963 Harley-Davidson Panhead with toy possum Pete at Tidewater Motorcycles during the Amazing Peanut Chase on Saturday.

Friends and family hopped in their cars and on top of three-wheeled motor vehicles to scour the city for precious peanuts on Saturday. Teams drove for miles and solved nutty clues to win fabulous prizes in the fourth annual Amazing Peanut Chase.

Suffolk Public Library’s all-ages scavenger hunt drew more than 50 participants on Saturday, which consisted of more than 20 different teams. These teams got started Saturday morning by picking up their packets at the Chuckatuck Library.

“I think we’ve had a great turnout, said Suffolk Public Library Adult Program Services Coordinator Ashley Reed. “We have a lot of repeat participants (from previous years), so that’s cool.”

Each team was given a packet with clues that, when solved, led them to nine different spots in the city. Each spot — a business, nonprofit, public space or otherwise — had a small plastic box with peanut cards inside.

Every card was a team entry into a prize drawing. The library also partnered with Keep Suffolk Beautiful, who provided teams with litter pickup kits for their travels.

“If they fill up a bag of litter while they’re out, (then) they get entered into a separate raffle,” Reed said. “They’re going to a lot of different locations across the city and hopefully leaving them a little cleaner.”

The scavenger hunt got families outside and under clear blue skies on Saturday.

Families stopped by the entrance to the Nansemond Indian Nation’s Mattanock Town off Godwin Boulevard in Chuckatuck. The card box was placed underneath the Mattanock Town welcome sign, with colorful spinners on either side of it.

Ainslee Joyner, 7, jumped out of the car to grab a peanut card for her team. She, her mother Dawn Joyner and aunt Marsha Mears decided to figure out all the clues first, then go from point to point.

“It’s fun,” Mears said beside their car parked at the Mattanock Town entrance. “It’s a cute little thing that they do, (and) it’s pretty cool.”

They found a card box on the patio at Lil’ Yeti Snoballs on Pruden Boulevard, where they could cool off with more than 100 different flavors of shaved ice.

“We have a lot of exciting things here (in Suffolk),” Dawn Joyner said.

Participants stopped at the Tidewater Motorcycles on Godwin Boulevard to get a peanut card, but they also got to take a photo atop a 1963 Harley Davidson Panhead, with Pete the toy possum in tow.

Tidewater Motorcycles owner Pam Mathis said it’s been fun to see such a wide variety of people come through her shop on Saturday for peanut cards. They spanned all ages and all sorts of crazy costumes.

“We’ve had people dressed up in costumes with giant glasses, and with peanuts for finger nails,” Mathis said.

At the ForKids Suffolk Regional Center on West Constance Road, Shirley Brackett, the ForKids crisis response director, used the event as an opportunity to teach participants about homelessness in Suffolk. Teams had to do a quick activity with Jenga blocks in order to get their peanut cards, which gave them a lesson about homelessness in their city.

“It was an opportunity for us to raise awareness of homelessness in Suffolk while people were participating in the Amazing Peanut Chase,” Brackett said.

The chase was also an opportunity for teams to cruise down Suffolk’s green, forested roadways toward Lake Burnt Mills, where a card box was placed underneath the sign at the boat ramp.

Steven and Kim Smullen rode to Lake Burnt Mills and all the other Saturday spots on their striking blue, Can-Am Spyder three-wheeled motorcycle. Both their team name and the bike’s name were “Blue Goose.” Steven Smullen said the bike had earned the name from the squawk of its horn.

He said it had been a good ride on Saturday. The married couple had to outrace their adult children, who were on another team.

“We’re trying to beat our kids, ’cause they’re doing it with us,” Kim Smullen said.

The winning teams for the three main raffles were Polleyester — which has participated every year in the Peanut Chase, according to the library’s Ashley Reed — Elf and Bread is Life. Additionally, nearly 15 teams took litter pick-up kits and brought back bags of garbage at the end of the day.

“It’s really fun to hear from the participants that some of the sites (were) new to them,” Reed wrote in an email. “We had a lot of great community partners that acted as sites and as always are really appreciative of the support of these enthusiastic partners.”

Suffolk residents Cindy and Stuart Fegley, along with their 21-year-old son Christopher, on Saturday joined thousands of others gathered at... read more