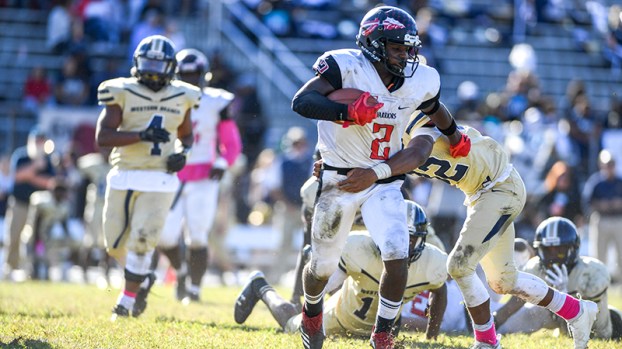 Gordon to play at ODU

After a strong senior campaign for the Warriors last year, Gordon is welcoming the opportunity to play college football. He will move on the next level to compete at ODU. To play in college is something he had always wished to do since he was a kid and is now excited about the opportunity.

“The whole recruiting process was stressful,” Gordon said. “A lot of colleges reached out with interest. When Coach Wilder offered me the opportunity to play for the Monarchs, it was a dream come true.”

Gordon went on a visit on one of the best days ever for the ODU football program; the day the Monarchs upset top-10 ranked Virginia Tech back in September 2018. He said the atmosphere during that kind of an upset and pretty much sold him on the idea of playing there.

“I’m looking forward to the experience,” he said. “I’ve been watching college football all my life, and now I get to play on the biggest stage.”

Gordon mentioned that the ODU coaching staff has been welcoming of him, though no specific plans have been laid out for him yet. While at Nansemond River, Gordon played on both sides of the ball and will most likely project as a defensive back for ODU. To come in and make an impact, Gordon believes he will need to stay focused.

“Staying focused and learning as much as possible will be key for me,” he said. “I want to keep my same work ethic that has gotten me to this point.”

He also gave credit to his family and coaches for helping him through the whole process. Throughout his high school career, Gordon feels like football taught him a lot of lessons that he can carry on to college.

“I felt like I had a great senior season,” he said. “I prepared all summer for it; now, I’m ready to take what I’ve learned and use it at the next level.”

During his junior campaign, he helped NRHS on a state playoff run on his way to becoming All-State. The following season, Gordon was an All-District and All-Region selection on offense and as an all-purpose player. Nansemond River fell a game short of the region championship and finished 8-4 on the season.