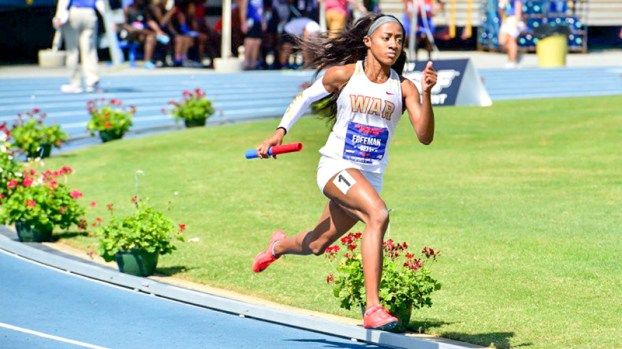 Two weeks removed from a one-of-a-kind comeback at the Class 5 state meet, Nansemond River High School turned its attention to the national meet. There, Team WAR was able to have a couple of notable finishes that allowed athletes to earn All-American honors. With the seniors going to compete in their final high school meet, it was an emotional experience for both athletes and coaches.

“It was very emotional,” Coach Marco McKoy said. “With the seniors having done so much for this program, it was an emotional time for us. Just with how hard they have worked in the last three weeks with this being the last meet was exciting but emotional.”

“A few things didn’t go our way, but we always compete at a high level,” McKoy said. “The girls showed up, and they never quit. We always find a way to pick ourselves back up.”

Nansemond River has officially wrapped up its first season since former coach Justin Byron moved on to the college level. With McKoy moving to the helm from his assistant position, Team WAR finished with two state titles and a national title. During the indoor season, they took home the 4×200 national title.

McKoy said the whole year was a learning experience for him, but he’s thankful to have been in the position.

“I learned a lot, which makes everything better for me moving forward,” he said. “We had a lot of ups and downs, but it’s something I wouldn’t change for the world. The kids helped me grow throughout the year, and I was happy with what we were able to accomplish.”

Next year will be a different look for Nansemond River. They won’t be as strong from a veteran perspective, but McKoy believes that they have a lot of young talent who will start to cement themselves as the future of the program. The senior class accomplished a lot, and all will be taking their talents to the next level to run at big-time NCAA Division I and Division II programs.

“It was just a great year and so much fun to be a part of,” McKoy said. “It was special, from the accolades to the performances.”