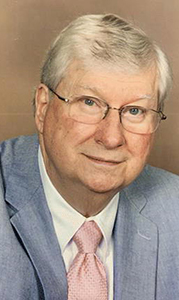 He was born on March 7, 1939, in Suffolk, the son of the late Oscar Kennedy Gardner and Esther Marie Holland Gardner. Also remembered is his brother, Thomas Hartful Johnson; a sister-in-law, Sarah Miles Johnson; mother-in-law, Georgene Shelly Smyth; and father-in-law, Karl Benjamin Smyth, all of whom preceded George in death.

George was a passionate leader in the Wilmington Prostate Cancer Support Group and an active member of Grace United Methodist Church, serving on the Outreach Committee and active in the Bible Sunday School Class. He was a recipient of the 20-year recognition for commitment to lifelong learning by participating in College Day at the University of North Carolina at Wilmington. He was also a member of the National Space Society, the Bluefish Society and was a Master Gardner.

A memorial service will be held at 11 a.m., Saturday, June 22, 2019, at Grace United Methodist Church with the Rev. Tal Madison officiating.

The family wishes to express a special thanks to all the doctors and nurses who have provided care over the past years. A very special thank you to friend Jerry Cribbs for helping George appreciate the magic of music.

Condolences may be left at www.andrewsmortuary.com.