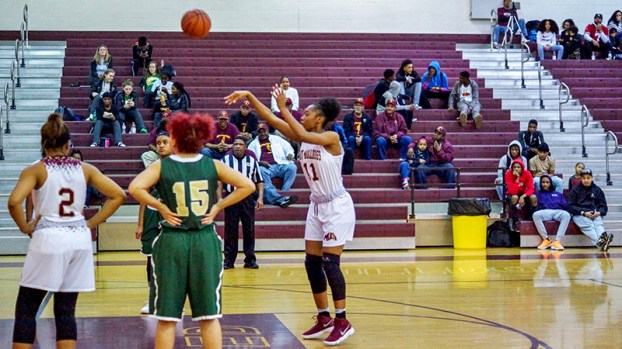 Goolsby set to head to Claflin

Goolsby will be headed to a new home for college basketball. After spending a year at Goldey-Beacom College, Goolsby felt like it was best for her to go a different route. That led to her choosing NCAA Division II Claflin.

The former Lady Bulldog mentioned that she liked what a new situation could do for her going forward and embraced the opportunity.

“I realized that at the end of my four years where I was previously at, I don’t think I could have reached my full potential. I appreciated being a part of that program, but I didn’t feel like my best interest was there.”

After deciding she’d leave, Goolsby went through her options, which she said were all good, but felt like Claflin was the best way to go. Last season, she played in 15 games.

“I would be getting a great education there, and Coach (Revonda) Whitley gave me a different vibe,” she said. “She is a great coach to be under and to learn from, I feel like being in one of the toughest conferences in Division II would really challenge me, and I am looking forward to it.

Claflin went 15-14 last season, and they see Goolsby coming in and contributing in a small forward or power forward position. They feel like her defensive versatility will help the team, as she can come right in and bring a grit and grind to the team. Her goal at Claflin is just to become the player she always believed she could be.

“I just want to work my way to be one of the most versatile players in the conference,” she said. “Just be a great teammate and help the program win.”

After leaving Goldey-Beacom, which is located in Delaware, Goolsby is excited to start a new chapter in South Carolina, where Claflin is located.

“Just deciding to go to Claflin was exciting,” she said. “I’m excited about kind of starting over. I didn’t feel like I was at my best where I was, so being able to get another opportunity to be that, I’m excited about.”

At King’s Fork, Goolsby was an All-District selection as a senior and helped the Lady Bulldogs through the playoffs, falling one game short of the state championship game.