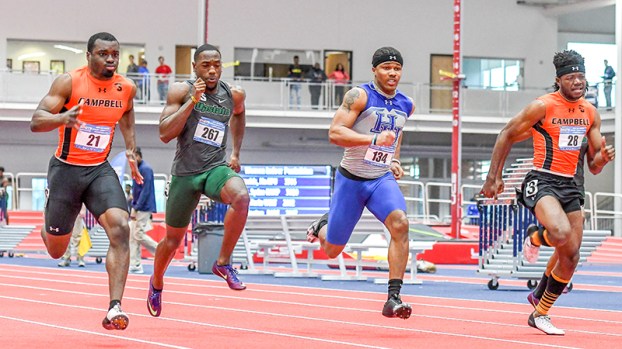 As a freshman for Hampton University, Little was able to experience some early success. At the end of his senior season at Lakeland, Little signed a Letter of Intent to play both football and run track at HU. Even though he was redshirted on the field, he was able to step onto the track in the indoor season and be a part of a conference championship team and then eventual outdoor champions.

“My first year was really eventful,” he said. “I accomplished a lot of things and even improved as a person.”

Going into his first year, Little knew that college track and field was going to be different. The athletes are faster and stronger. However, during the indoor season, he performed well and fell just a spot short for competing in the 60-meter finals, and during the outdoor season, he was an alternate for the 4×100 team during the championship runs.

“It was all overwhelming to be a part of,” Little said. “To win both titles, and for the women to win both titles as well, just showed how much work we had put into the season.”

Little was a two-sport standout all through high school. Dedication is what matters most when wanting to excel at both sports. During the summer, Little wants to continue working on his speed and getting stronger, which he feels will help him in both sports.

“It takes hard work,” he said. “You have to be dedicated to both, and your coaches will help you get better. I love both sports, and I love giving my all out there for both.”

After initially signing to play receiver, Little is making the switch to cornerback, making it an easier path for him to get more time on the field. Little also redshirted with some other Suffolk natives, former Bulldog Darran Butts and former Lakeland teammate DeAndre Faulk. They all came in last year, and Littles sees it as a cool experience being able to go through things and learn with familiar faces. It is likely this fall that all three of them will see time on the field.

Faircloth selected to A-10 All-Rookie team