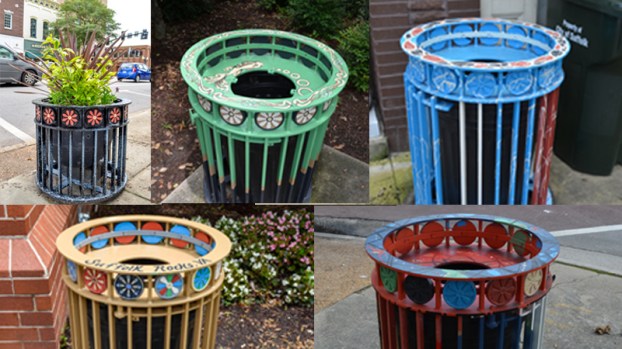 People in downtown Suffolk can check out eye-catching alterations on North Main Street streets, courtesy of Suffolk’s Premier Art, Retail and Cultural Initiative, along with several community partners and some very talented artists.

Four painted trash cans were installed at various spots downtown Wednesday morning, plus a planter in front of the Plaid Turnip with strikingly colorful flowers.

The planter and receptacles were removed earlier this spring and painted with different colors and designs in just over a month, according Carolyn Phillips, executive director for the SPARC Initiative.

The receptacle at the intersection of Main and Washington streets — near the Mr. Peanut statue in Damiani Square — has a smattering of blue, red, green and other colors of paint. The one by Brighter Day Café has a bright combination of light red, blue and white.

Another near the Obici-Oderzo Fountain in the courtyard of the Godwin Courts Building has a green top half and black bottom half, plus elaborately detailed ribbons and rings in gold color, along with a fish.

The can on the sidewalk beside the courthouse was exquisitely done by the “Suffolk Rocks” group, with “Suffolk Rocks, VA” written on the rim of it.

Phillips thanked various organizations and departments for their assistance with this project.

The Suffolk Foundation provided funding for supplies through a grant, and the Sherwin-Williams paint store on Pruden Boulevard provided those supplies, along with expert help.

Suffolk Parks and Recreation gave permission to paint the trash cans. They also helped with removing them in the first place and also placing them back into location, Phillips said.

She said that Department of Economic Development personnel were instrumental in helping SPARC come up with the idea. The City Manager’s Office approved the project, and the Department of Planning worked with SPARC on the color palette.

“It serves as a beautification project for downtown, and it’s also a way to show public art in an accessible way,” Phillips said in a phone interview on Wednesday.

Friends and family hopped in their cars and on top of three-wheeled motor vehicles to scour the city for precious... read more