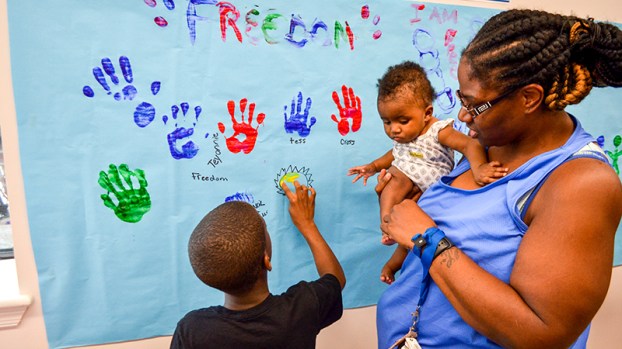 Deanna Smith and her 5-month-old goddaughter, Lanoir Jeter, enjoy watching the arts and crafts activity at the Juneteenth open house celebration that was held at Morgan Memorial Library on Wednesday.

The library hosted an open house on Wednesday in observance of Juneteenth. Also known as Juneteenth Independence Day or Freedom Day, the American holiday commemorates the June 19, 1865, announcement of the abolition of slavery in the state of Texas.

The holiday further reflects on the emancipation of enslaved African Americans.

“It’s like celebrating freedom,” said Michele Pettway, one of the speakers at the library’s open house and a member of Main Street United Methodist Church.

Pettway brought handmade dolls and quilts that she said represented Underground Railroad culture that led many runaway slaves to freedom. A third-generation quilter, Pettway brought several quilts to the open house that were made by her family and herself.

One of Pettway’s quilts was a tapestry of different quilts that she said were used by members of the Underground Railroad used to mark escape routes and refuges for runaway slaves.

Another one of the speakers was retired school teacher Sylvia Bond, who did a dramatization of two different poems, “The Negro Mother” by Langston Hughes and “When Malindy Sings” by Paul Laurence Dunbar. She also read two poems from her own book titled “Verses From the Heart.”

Rows of seats were filled with attentive listeners, and several members of the audience stood up to share their thoughts, sing songs and even recite legislation.

Attendees sang songs like “A Change is Gonna Come” by Sam Cooke and the American Negro spiritual “Swing Low, Sweet Chariot,” and each performance was met by applause from others packed into the Morgan Memorial lobby.

Even children spoke their peace for the proceedings. Homeschooled siblings Kyros, 7, and Mallion, 5, Simmons recited the entire Bill of Rights with help from their grandmother, Dr. Gwendolyn Fox.

Fox said it’s important for her grandchildren to know their rights, as well as their history.

“We want them to know all of their history,” Fox said, “(and) especially their African American history.”

Refreshments were served, and tables were stacked with books and other material steeped in African American history. Children and adults painted their expressions of what Juneteenth meant to them with different colors of paint and a large sheet of paper on the wall.

LaSandra Adams, the library’s local history and genealogy librarian, said the open house was a success because people were able to enjoy themselves, express their feelings about Juneteenth and also learn something new in the process.

“It’s always wonderful to be able to offer a service to the community, and for everyone to come together in peace and harmony,” Adams said.