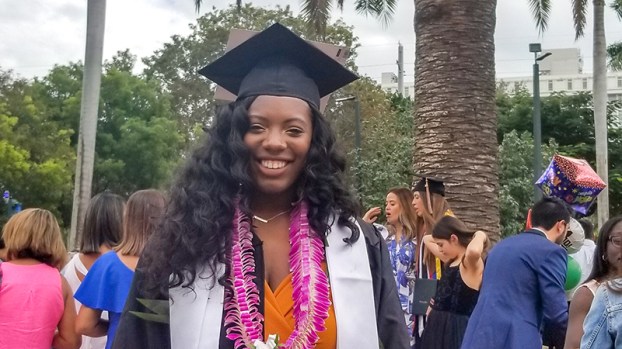 After graduating in the fall last year, Rashid went into her final indoor season prepared and ready for a strong season. The indoor season started off a bit slow, as she had to battle injuries. However, she went on to have a personal record in the shot put and placed eighth at the Atlantic Coastal Conference Championships.

She prepared hard for the outdoor season and described it as the best outdoor season she’s had since she has been at Miami. At the Power 5 Trailblazer meet, she placed eighth in the shot put but won the discus throw event. She had multiple top-five finishes in numerous regular season meets for the Hurricanes in both the shot put and discus. At the ACC Outdoor Championships, she placed fourth in the shot put and third in discus. She went on to place fifth in the discus at the preliminaries for the outdoor championships and qualified for nationals for the first time in her career.

“I am absolutely grateful to finish this year the way I finished because of the injuries I had earlier on in the year,” she said. “So, to make nationals for the first time was absolutely amazing. I stayed confident in myself, and I think this is why my post-season meets were so spectacular.”

At nationals, she had a 10th-place finish and wished she was able to place higher, but she will get the chance to do so next season, as she is eligible for one more outdoor season despite having graduated.

“I have one more season of outdoor left, and I can’t wait to see what’s in store,” she said. “To this point, though, I feel like my time at Miami has been very good.”

Rashid has her bachelor’s degree in exercise science, and while she is currently pursuing a master’s in strength and conditioning, she hopes to be a part of her fifth ACC championship and to have a potential national championship of her own.

At Nansemond River, Rashid helped Team WAR win state titles, and she won a couple of state titles of her own in distance throwing. She has ranked top 20 in the country in both discus and shot put.