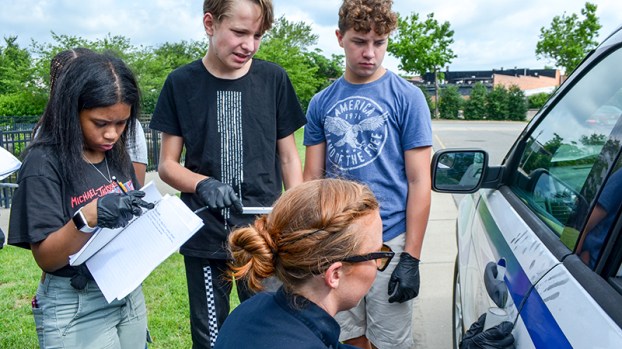 In the Thursday morning heat and humidity, a group of 10 teenagers investigated a stolen vehicle outside of the Health and Human Services building in downtown Suffolk.

They used forensic techniques to collect evidence and took both pictures and detailed notes. They even made a cast of a footprint in the dirt nearby, using dental stone casting material.

For his part in the exercise, Leonid Terekhov, a 14-year-old rising freshman at Nansemond River High School, carefully collected fingerprints from the handle of the white Ford Explorer.

It wasn’t easy at first — dusting the handle, applying clear tape and safely removing said tape to transfer that print to a piece of paper — but eventually the young Forensics Camp investigator got the hang of it.

“When I did it the first time it was hard, but then it got easier and easier. It was fun,” Leonid said.

Leonid was one of 52 students in the Suffolk Commonwealth’s Attorney’s eighth annual Forensics Camp, a week-long summer class that’s held free of charge. Sessions were held daily from June 17-21 for students ages 12 to 15.

On Thursday, teams of students each faced a different crime scene scenario, such as an assault at a card game and a bank robbery. Suffolk Police Department Forensic Technician Stephanie Durbin’s team of students dealt with a stolen vehicle case.

According to this scenario, a white Ford Explorer — which on Thursday morning was a Suffolk Police vehicle issued to Durbin — was reported missing more than a week prior.

The vehicle was spotted by the scenario’s victim character played by assistant Emma Shearin, 17. The victim determined that there were items in the vehicle that didn’t belong to her, and Shearin remained on the scene to answer any questions from the team.

“We want them to kind of work their way through what a criminal would have done in this situation,” Durbin said.

The team gathered interesting items from the vehicle, like a soda can and a receipt, neither of which belonged to the victim.

Any and all items that may have possessed DNA or other evidence were collected according to protocol. They also collected an eliminator DNA sample from the victim, as well as her fingerprints.

Durbin stressed to the students that it’s all about properly, carefully and thoroughly gathering as much evidence as possible to identify a suspect.

“It’s not just one piece of evidence they’re looking at, it’s multiple (pieces),” Durbin said, “and it’s about (thinking) through the possibilities of how that item was utilized instead of just taking it at face value.”

Students at the camp learned that crime scene investigations are not like what you see on television shows. Shows like “The Flash” may show these types of investigations, but not accurately, rising King’s Fork High School freshman Nierica Flythe, 14, said.

Students that took the class in the past, like Emma Shearin, came back as assistants to earn up to 20 hours of community service towards high school graduation.

This was the third year that Lenise Bazemore, a 14-year-old rising freshman at KFHS, participated as a student in the program. She said she’s enjoyed coming to this camp because she wants to one day be a prosecutor herself.

“(Community Outreach Coordinator Joan Turner) just makes it feel like home,” Lenise said. “I was shy at first. This made me have more friends and socialize more.”

Their measurements, observations and other critical-thinking exercises at these scenes incorporated science, technology, engineering and math, Turner said, and demonstrated the real-world applications of those skills, as well as what they offer in potential careers.

UPDATE 5 p.m.: All lanes of travel have reopened at this time; however, both westbound lanes will be briefly closed... read more