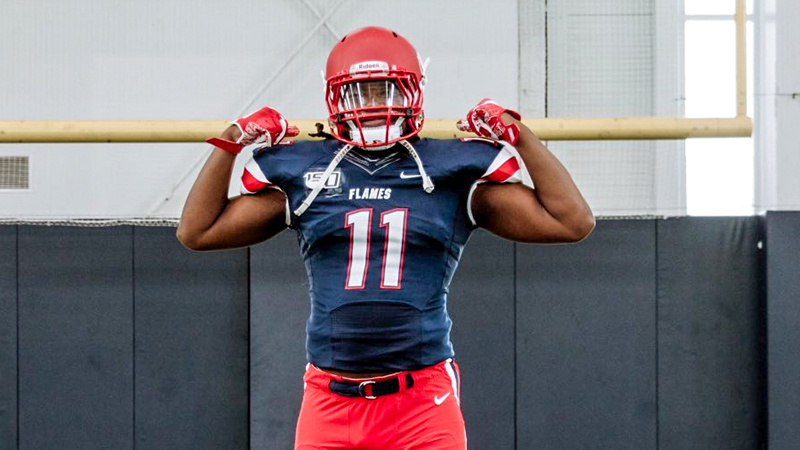 Pheldarius Payne pauses for a photo at his recruiting visit at Liberty University. Payne is garnering interest from multiple NCAA Division I schools. (submitted photo)

Payne has been getting a lot of interest on the recruiting scene. Coming out of Nansemond River in 2018, Payne signed to play at the junior college level at Lackawanna College. After a strong first year there, schools have been lining up with interest.

As it stands now, Payne has one offer from NCAA Division I Lynchburg University. However, he has gone on visits to Syracuse, Penn State and Liberty. He has heard from schools like Florida and will visit James Madison University, among others, soon.

“Everything is just coming along,” Payne said. “Just taking my visits and hearing from a ton of schools.”

The Lackawanna team went undefeated last year, and Payne made appearances in 11 games and finished with 23 tackles and five sacks. He’s currently getting prepared for his sophomore and final season there.

“I felt like I played well. I backed up some good players,” he said. “Guys who are heading to big-time schools. We have a good coach, and I’m just getting better each day.”

Throughout the recruiting process, Payne said, his family has been a big help. His father, Phelton, is the defensive line coach for the Warriors, where his younger brother, Payton, plays as well.

“My family has been a big help getting me to these visits and camps,” he said. “We are just taking our time with everything, just making sure we are making the right decision when it all comes down to it.”

It is important for Payne, after he commits, to return to Nansemond River to sign his National Letter of Intent. He wants to show young kids from Suffolk that they can do what he is doing.

“Without NR, I wouldn’t be half the person I am,” Payne said. “I want the young kids to see they can accomplish these things too.  I want everyone I grew up with, from friends, teammates, lunch ladies and teachers, and just all the young kids, to know that there is hope.”

Payne could end up playing his final two years of college football in Virginia but says everything is on the table as he weighs his options. At Nansemond River, he helped the Warriors to a state semifinal finish as a senior. He was also selected All-District and All-Region at defensive lineman.