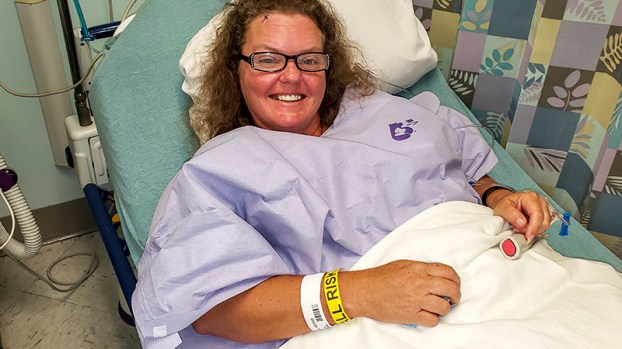 Friends and family are rallying around a former Suffolk high school teacher — after her second brain surgery in roughly a dozen years.

Heather Cadorette, 45, was a biology teacher at King’s Fork High School and was named Teacher of the Year in 2007. She’s an active member at New Branch Community Church in Windsor.

“Heather Cadorette is one of the smartest, kindest, most genuinely good souls I’ve ever known,” Perry wrote. “She is a daughter, a sister, a wife, an aunt, and a friend to many.”

Doctors discovered that she had an epidermoid tumor on the surface of her brain, and she subsequently had a successful surgery — an orbital zygocranialosteotomy — to remove the tumor, although small bits of the mass could not be removed safely, according to the GoFundMe page.

Cadorette had her second surgery earlier this June. She said in a phone interview that she’s now dealing with her “new normal” with her husband, Andrew Cadorette Jr.

She and her husband moved in with her parents in Suffolk. Since her second brain surgery, she has to be extremely careful as she monitors her health and keeps up with her medication.

“It’s just dealing with a new normal,” Cadorette said. “I’m not supposed to go upstairs, (and) I have to avoid any kind of situation where I could hurt my head. I just have to go home and be sedentary and that’s just a little difficult for me.”

Adding to that difficulty is the recent passing of her husband’s father, as well as the increasing amount of ongoing medical and recovery expenses.

“At this point, we’re just waiting for the bills to come in, but we know they’re coming,” she said.

Perry set up the GoFundMe page to assist her friend in this difficult time. Cadorette has also received support from Paula Bond, another of her friends that’s deeply committed to her recovery.

“My friends have been awesome. It’s just so heartwarming to know I have good friends like that to make all the difference,” Cadorette said.

As of Monday afternoon, $5,985 has been raised towards the GoFundMe page’s $100,000 goal. Visit gofundme.com/heather039s-brain-surgery for more information.

A “Brain Surgery Fundraiser for Heather Cadorette” is also being organized for Aug. 10 at Bowers Hill Baptist Church, 4420 East Road in Chesapeake. This fundraiser will include crafts, vendors, antiques, baked goods, homemade pulled pork barbecue sandwiches, a raffle and a silent auction, according to the event’s Facebook page.