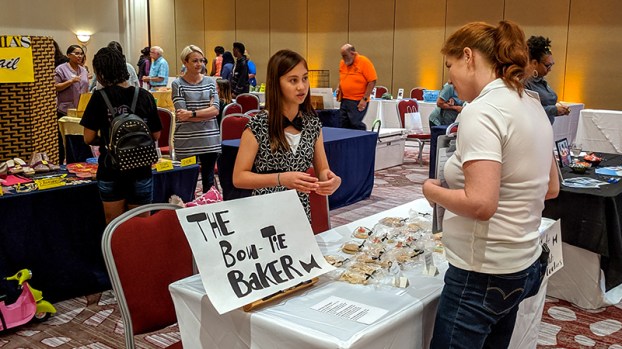 Eden Swineford, 13, came from the Richmond area to showcase her business, The Bow-Tie Baker.

The expo was really three expos in one, with a business-to-consumer expo for adult-owned small businesses and the Suffolk Humane Society present to showcase adoptable animals and provide information on adoption and other resources.

But the featured group was the young entrepreneurs, with 14 businesses run by young people in the spotlight. They had the opportunity to win awards and prize money for things such as highest business earning potential, best sales and marketing presentation, most original business idea and most-liked vendor by those who attended the expo.

Chaing, an entrepreneur and the president of Suffolk Executive Offices, said he came up with the idea for the expo because of his daughter, who started her own business making candles when she was 6. He said his daughter used to attend craft shows to sell her wares around adults, but felt intimidated by it.

“I needed to get a marketplace for kids where kids can spur other kids on,” Chaing said. “Because actually, these kids don’t know each other, but they’re always talking, conversing, sharing ideas. They’re interacting, and they feel encouraged by it.

“This year, I decided to create this environment for kids to interact and sell the products and be creative, let them do their thing.”

Do their thing is exactly what the kids are doing.

Zakery Owens, 10, of Suffolk, makes recycled grocery bag holders as part of his business, Zakery’s Creations. He learned to sew when he was 4 and has been making things ever since. He also makes stuffed animals.

Zakery, who said it took him a month to learn how to sew, said many people are surprised to learn that he is able to do it.

Zoe Carter, 8, of Suffolk, and Natalie Stanley, 7, of Chapel Hill, N.C., run Zoe’s Dreamtopia. The two make cupcakes, cookies and other pastries, along with lemonade. Zoe said they had only been in business “since 9 o’clock” Saturday morning, and had stayed up all night to make their creations.

The two said a lot of people had liked their food and their business.

“Many people have been coming back,” Natalie said.

Carter Shupert, 14, of Virginia Beach, set up shop with his business, Carter’s Emporium, in which he sells blow dart guns and darts. The blow dart guns he sells in medium and large sizes, and he custom-makes the paper darts and handmade nail darts. He used his father as target practice during the expo.

He said he’s been in business for about a year or two.

“I watched a video by The King of Random,” Shupert said. “He made these dart guns, and he made them differently and I changed it up a bit. I talked to my dad about it, and he said that’d be a great idea for a business. So we got the supplies and started making them and selling them. And now it’s sort of like my hobby.”

“This is my first time actually selling them,” she said. “Usually I just do it for fun.”

Her sister, Kerith Swineford, 15, also had her own business at the expo, The Bookworm Cards. She uses pages from real books to make her cards and bookmarks. She then decorates them with pastel and pen drawings, glue and other designs. It was also her first time selling to the public.

“I really love books and I like drawing, and I don’t like repetition, so each one of my cards is special in its own little way,” Kerith Swineford said.

Like many who attended the expo, Kerith Swineford said she got a lot of positive feedback for her business.

“I enjoyed it a lot,” Kerith Swineford said. “There’s a lot of people that seem very happy with the product. I’m just very happy with how they’re (reacting). They’re helpful to me. A lot of people have been helping me out, telling me hints and tips for journeying on, in case I want to do more.”

Suffolk resident Robert “Jack” Ewald, 94, said that he felt “rejuvenated” when he shook hands and commiserated with his fellow... read more