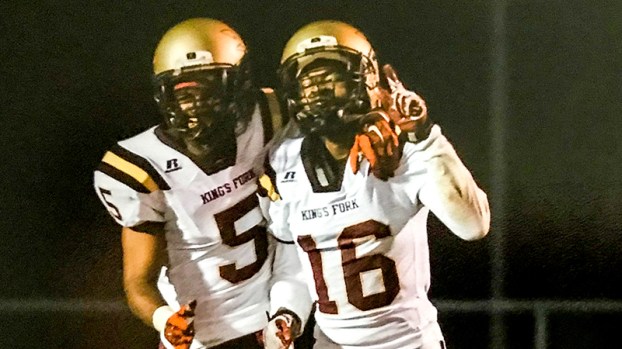 Garrett Williams celebrates after making a play for the Bulldogs. Williams has picked up an offer from Temple University. (Submitted Photo)

Williams pulls in offer and interest

Around this time of year, recruiting starts taking off for student-athletes as they go to camps at major football programs — and some walk away with scholarship offers. Williams is currently going through the process at the moment and has already pulled in his first NCAA Division I offer.

Williams has an offer from Temple University but has heard from plenty of other schools. Other notable schools he has heard from include William & Mary, Villanova and James Madison. Most of the programs recruiting Williams see him as either a defensive back or a safety.

As Williams prepares for his senior season, he is excited about what the future has in store for him. With the Bulldogs being under a new direction, he sees good things happening for the program.

“I’m excited to see where they take us and how they develop the program,” he said. “I’m just looking forward to continuing to progress as a player and being a great teammate.”

Williams missed his whole junior season last year due to a leg injury. He has since made a full recovery but admits that the whole process of recovery was tough. However, he is happy that it hasn’t deterred his recruiting process much. It has made the potential of his senior season even better.

“It hasn’t been easy going through the process,” he said. “It’s had its ups and downs. However, the opportunities have been what I have been working for, so it’s definitely exciting to be hearing from these schools. My last year is bound to be special because of what happened last year and it being my last year. People have been telling me to enjoy it, because it’ll never be the same after this.”

Williams doesn’t have a set time to make his decision on where he will play college football. His next offer could be the school he chooses or maybe even the final school he hears from.

“Whenever the time is right,” he said. “If I feel like the right fit for me is there, I’ll decide.”

During the 2017 season, Williams was integral to the success the Bulldogs had in winning their first Southeastern District title. That season, the Bulldogs ranked first in their region as well.

Faircloth competes at USATF U20 meet