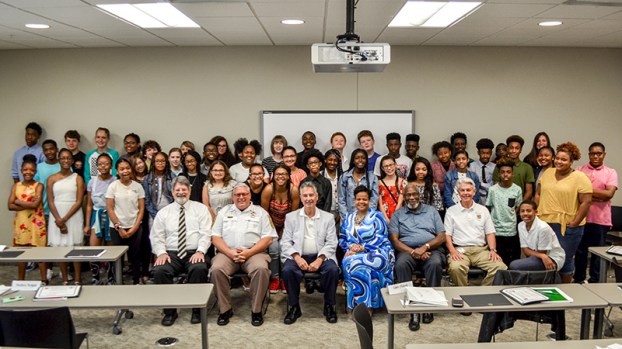 The free, week-long camp taught students ages 12 to 15 lessons in how forensic science is used in crime scene investigations. They also heard from prosecutors about how that forensic evidence is used in trials.

“It is our hope that you will go back into the community and share this wonderful knowledge and information with other youth and parents,” Community Outreach Coordinator Joan Turner said to this year’s graduating class. “Thank you for your participation, interest and attendance — for being so attentive and excited to learn new things during the week.”

The students applied the science, technology, engineering and math skills they learned in camp as teams in their own mock crime scene scenarios.

On Thursday last week, five different teams each faced a different crime scene scenario, such as an assault at a card game, a bank robbery and a stolen vehicle.

They then presented their findings on Friday to a room full of people, including their families and the constitutional officers, sheriff’s deputies and other officials that support this camp every year.

Commonwealth’s Attorney C. Phillips Ferguson thanked the instructors, assistants and others that have allowed this camp to keep going as a free opportunity to young people in the city.

“They really enjoy coming and doing this, because normally they are in a court room having to prosecute people that are committing crimes,” Ferguson said. “They would much rather be here with us, helping young people be better people, which is what we are trying to accomplish.”

Most of all, he praised the students that showed up to ask questions and learn each day.

“We like to deal with young people like are in this room today that are out here trying to better themselves, and trying to … make something of themselves so that when they do graduate from high school and move on to college, they are going to be your leaders of the future,” he said.

Art Days for kids this summer

This summer, parents can bring their children to fun, inexpensive art classes that will entertain and educate them while they... read more