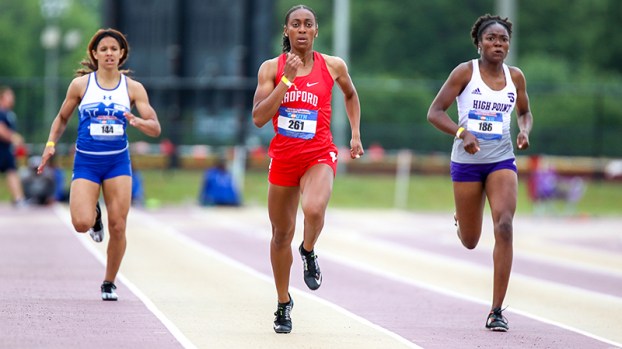 Foster steps up in year two

Team WAR alumni have found ways to stand out not only during their high school careers but also in their college careers. As a sophomore, Foster has found a way to step it up a notch for Radford.

During her freshman season, she competed well in the 400, 4×400 and the 200. She went into her sophomore season confident she could take the next step. However, during the indoor season, she suffered an injury that derailed her season.

She was able to bounce back during the outdoor season. During the outdoor season, she ran a season-best 57.94 in the 400. She then went on to run on a 4×400 relay team that broke the school record. Though Foster is used to record-breaking performances, having run for a powerhouse track program, it was even more special to do it at the college level.

“I feel good about it, because it’s at a higher level,” Foster said. “To be able to bring all of our talents together is a great feeling.”

Foster mentioned that being used to how things are done at the college level has helped her prepare for her sophomore season.

“As a freshman, you’re new and you are still getting used to different training,” she said. “As a sophomore, you know how things work, and you know what to expect when it comes to your workouts. I feel like I made a big jump from my first year, because my time decreased tremendously.”

Foster said she loves that there is strong competition at the college level, which drives her to be stronger and faster. Heading into her upperclassman phase as a junior this coming fall, Foster is hoping to continue setting season bests in times. This season, she wanted to drop times and was able to do so. She also wanted to be a part of the 4×400 A Team, and she was able to do that with the team that broke the school’s record.

At Nansemond River, Foster helped win state and national titles. She also helped break the school record in the 4×400 relay.