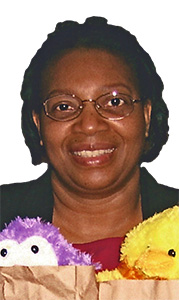 On June 22, 2019, God called home one of His faithful servants. Evangelist Judith Diana Anderson-Claude was born in Suffolk on Nov. 7, 1956. She is joining her son, Jim “Sonny” Petty, father, Robert Lee Anderson, and brother, Jerry Lee Goodman, in the Heavens with our Lord and Savior resting in eternal peace.

Judith attended John F. Kennedy High School, Blueridge Job Corps, and Paul D. Camp Community College, where she received her associate degree in business administration. She retired at Sentara Obici Hospital after 25 years of service. Enjoying her work as a certified sterile technician, Judith decided to come out of retirement and worked at Bon Secours Mary Immaculate Hospital in Newport News. Judith was an active member of Saint Paul Missionary Baptist Church in Suffolk. She served as an evangelist and was part of the M.P. Mitchell Usher Board. She was also Bishop Russell’s assistant for Bible classes held throughout the year. Evangelist Anderson-Claude was motivated to spread the gospel and never passed up an opportunity to give her testimony.