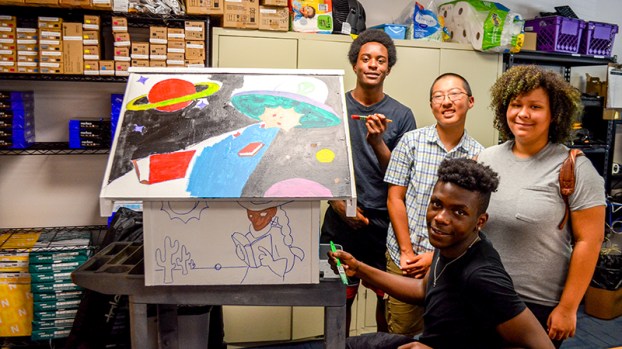 Teen interns for the Suffolk Public Library are adding color and style to a refurbished Little Free Library that will be installed downtown this summer.

Five library interns made possible through a 2019 Teen Intern Grant began painting this box of free books at Morgan Memorial Library on Thursday. The grant is from the Young Adult Library Service Association, a division of the American Library Association.

Little Free Libraries encourage local readership by offering a slew of books that can be borrowed at no cost. The one at Lake Meade Park, however, was in need of exterior repairs.

Library staff removed the box at Lake Meade and replaced it with another that was in need of home, according to Outreach and Program Services Manager Megan Mulvey. The removed box was repaired and painted solid white.

Youth and Family Services Coordinator Cory Bland then designed different scenes for each side of the library box, each one representing a different genre of fiction.

A UFO beaming up books for science fiction on one side, a fantastical dragon and unicorn with a book on another side and more eye-catching designs were added. It was up to the summer interns to color each scene with acrylic paint.

Bland said the teens had fun with their paint project on Thursday.

“They were having a good time out there,” he said. “They were laughing, joking, painting.”

Andrew Steiner, 15, said he enjoyed how creative he and his fellow interns could be with different colors.

“Just the way that you could (use) whatever colors and add things in,” Andrew said.

Thursday marked the third meeting of the library’s eight-week summer intern program from June to August.

The 2019 Teen Intern Grant was a $1,000 stipend to pay the hired teens. This grant is possible through a sponsorship from the Dollar General Literacy Foundation. Six teens were hired as summer interns, five of which were through the grant while another was sponsored by an anonymous donor.

As interns, the teens meet Tuesday and Thursday at Morgan Memorial Library each week to assist in library tasks and gain valuable work experience, like following a routine schedule, on-the-job problem solving and improving basic math skills, all of which have been identified as workforce gaps in the community, according to a press release.

They’re coming together — each from a different background — to work as a team, said Library2Go Coordinator Tamra Mabrey.

The team of library interns will return to finish painting their Little Free Library on July 11, after the Fourth of July. The refurbished box is expected to be installed at Tynes Street Playground in downtown Suffolk by the end of the summer.