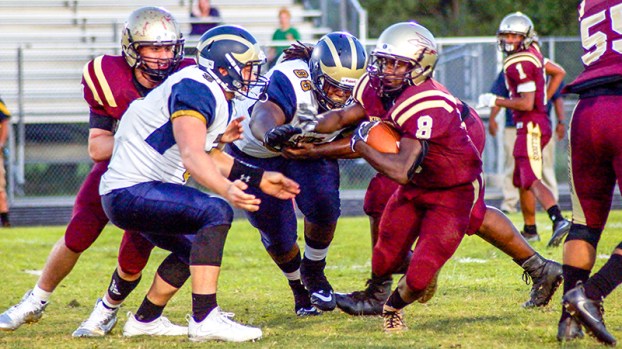 After redshirting his first year for the Pirates football program, Darran Butts is ready to hit the field.

The former King’s Fork High School standout has been staying patient in his process of getting back on the field for Hampton University. Coming out of King’s Fork in 2018, Butts had signed to play at HU after fielding multiple NCAA Division I offers. However, due to academics, Butts redshirted his first season. However, now that he is back on track, he’s excited about next season.

Butts spent a whole year for HU getting in the playbook, learning the ropes and focusing on academics. It paid off, as he finished his first year of college with a 3.0 grade point average. He felt like redshirting was great for him.

“It was a great experience,” he said. “I got to get bigger, stronger and faster, but most importantly, I was able to get right academically. I stayed busy and stayed working.”

Butts has his eyes set on getting on the field this season at running back. He has been anxious to play and has gained 22 pounds to improve his playing weight at the college level since he has been at Hampton. Even though he hasn’t played in a game since the fall of 2017, he feels like he is better than he was back then.

“I haven’t lost a step,” he said. “If anything, I feel like I’m better than ever. Last year helped me mentally and physically, and I can see myself having a great year with nothing stopping me.”

The Suffolk native also believes he still has a vote of confidence from his coaches as well. They believe he can become an impact player for the team this season.

“They keep telling me they believe in me and they think I can do some good things with the ball in my hand,” Butts said. “I believe every one of my coaches has faith that I can make plays, so I’m just staying patient and waiting for my time.”

In his time at King’s Fork, Butts became a full-time starter as a junior and immediately became a standout in South Hampton Roads. During his senior season, he helped the Bulldogs claim their first Southeastern District title in school history. Also during that season, he was the SED Offensive Player of the Year and was a first team All-District, All-Region and All-State selection. Butts was also the Suffolk News-Herald Fall Male Player of the Year in 2017.

Lowe hits homers for good cause