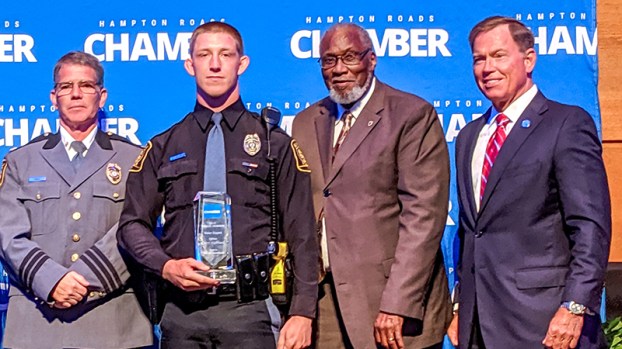 Suffolk Police Officer Corey Hubbard was honored Wednesday with the Hampton Roads Chamber Valor Award for his actions during a 2018 incident.

Hubbard was among a number of honorees at the luncheon, held at the Virginia Beach Convention Center. The chamber honored public safety officials from Hampton Roads with the Community Heroes Award, three Valor awards, three Lifesaving awards and three Investigative Merit awards.

The Valor Award is the given to recognize an action taken at extreme personal risk and clearly above and beyond the call of duty, according to the criteria for the award. It is awarded in situations where a first responder or unit faces a potentially life-threatening risk in their job performance.

Hubbard said he wasn’t nervous on Dec. 5, 2018, when he responded to a reported shooting. He said fell back on his training in reacting to the incident.

At the time, a suspect and victim were struggling for control of a loaded gun as upset family members were next to them, he said. Hubbard, the first to arrive and witness the chaotic scene, singlehandedly subdued the suspect, got hold of the weapon and applied a medical tourniquet to the gunshot wound on the victim’s leg.

“I looked down and I saw both of them actually had a hand on the weapon,” Hubbard said. “Neither one of them would let go, so I holstered my weapon, and I jumped on top of him so he couldn’t move underneath me.”

From there, Hubbard said he was able to remove the weapon from both of their hands, and swept the gun behind him and pulled the shooter off of the victim and put handcuffs on him. That’s when he was able to treat the victim’s wound.

Hubbard said the incident was over “in a matter of minutes,” with backup arriving soon after. Only then was he able to think about what could have been had events played out differently.

In a video interview played before the audience, Hubbard described his reaction to the scene during and after it.

Teen interns for the Suffolk Public Library are adding color and style to a refurbished Little Free Library that will... read more