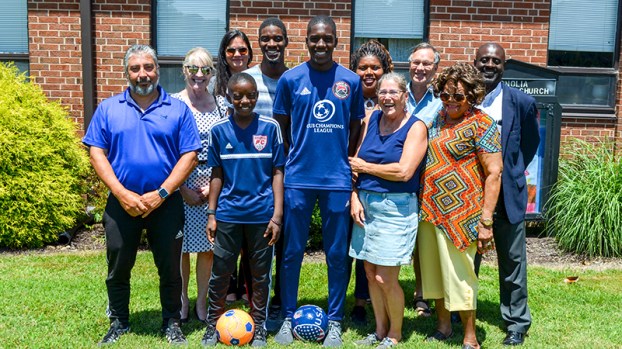 Talented soccer player and rising King’s Fork High School sophomore Jean-Claude Bilé will travel to compete on an international stage this summer, and his church is fundraising to help his family with the cost.

Jean-Claude, 14, was recently selected among the best of the Club Champion’s League 2004 Boys to represent the Premiership CCL United team at the Vildbjerg Cup in Denmark Aug. 1-4.

The Vildbjerg Cup is an international youth soccer tournament for girls and boys aged 7 to 17. There were 717 teams of 10,000 total players, managers and coaches in the 2018 tournament, accompanied by 9,000 parents, sisters, brothers and supporters.

According to vildbjerg-cup.dk, the cup is one of the biggest youth soccer tournaments in Europe and is one of Denmark’s biggest sporting events.

Jean-Claude is training with even more focus and energy than usual, now that he’s got the Vildbjerg Cup just a month away.

“It feels really good. I’m really excited for it,” he said Monday in a room filled with supporters at Magnolia United Methodist Church, where he’s a member.

He’s grateful for the opportunity, and for his friends, family, coaches, teachers and others that have helped him become a disciplined athlete, as well as a capable student.

His father and KFHS boys’ soccer coach Michel Bilé remarked on how it takes a village to raise a child — and that their family is thankful to be surrounded by that kind of support.

“I feel privileged to be able to reach out to anybody here if need be and feel supported from that standpoint,” he said.

Jean-Claude’s soccer training began at age 3 at the Suffolk Youth Athletic Association, where played until he was 13 years old.

SYAA Treasurer Geoff Payne recalled how Jean-Claude was eager to help referee games at just age 9. Referees had to be at least 12, Payne said, but Jean-Claude was still able to call games with Payne beside him.

“He knew how to referee a game at 9 years old,” Payne said.

His wife, Stella Payne, a retired teacher, helped Jean-Claude’s mother Kenitra Bilé with his curriculum when he was homeschooled in the sixth grade. Stella Payne was credited with giving Jean-Claude his love for reading, which has helped him succeed in school.

“You set a high standard, and a person will get there eventually,” she said. “I wasn’t going to let go, and he didn’t let go. He rose to my expectations.”

Jean-Claude may seem quiet, Basile said, but his actions on the field speak much louder than his words.

“You actually get to see his motions and body language and the hard work he puts in at such a young age,” Basile said.

Jean-Claude transitioned to the Beach FC U14 club team after he turned 14, and in the spring he played for the KFHS varsity soccer team. He was also the school’s kicker for the football team last fall.

Principal Dr. Ronald Leigh said he’s a “tremendous athlete” and a role model for future Bulldogs. His dedication has also made an impression on his brothers Jean-Pierre, Jean-Mathias and Jean-Louis.

Jean-Pierre looks up to his older brother and has the same dream as Jean-Claude: to become a professional soccer player.

“He’s a good soccer player,” Jean-Pierre said about Jean-Claude. “He scores a lot of goals and jukes people out.”

In July 2018, Jean-Claude demonstrated his talents in the International Champions Cups Futures in Orlando, Fla. He was one of 60 finalists selected throughout Virginia for the ICC Virginia All-Stars soccer team.

Jean-Mathias, a rising sophomore at Old Dominion University, said it’s “amazing” to watch his younger brother go toe-to-toe with older players, which he’s able to do because of his work ethic each and every day.

“I just want to see him go far and help (him) any way I can,” Jean-Mathias said.

Jean-Claude hopes to play one day for the U.S. men’s national soccer team in the World Cup, a dream he plans to realize with hard work, and “with prayer and my family behind me,” he said.

Kenitra Bilé is proud of her son, not just for his work ethic, but also for his willingness to give back and to maintain a strong GPA in his high school honors classes.

“I just love his attitude,” she said about Jean-Claude. “Even on the field when guys are rough, he doesn’t get emotional. He plays clean and I love that about him.”

Jean-Claude also serves as treasurer for Magnolia United Methodist Church’s youth group “Salt,” which refers to “Sharing A Love Together in Christ.” Pastor Sheena Laine described him as a “living epistle for youth.”

“It’s awesome to have someone like him at church,” Laine said, “to see what love for the Lord and dedication and what parents can do for children. It’s wonderful.”

Magnolia United Methodist Church will hold a dinner fundraiser for the family’s trip to Denmark, with dinners from Nixon Catering. The menu includes barbecue, fried chicken, string beans and potatoes.

Meals will be served on July 13 from 4 to 7 p.m. at the church, located at 1764 Wilroy Road. The deadline for advance orders is on July 5, and meals may also be purchased for dine in or take out on the day of the fundraiser.

Meal tickets will cost donations of $10 each. The church’s goal is to sell 400 tickets to support Jean-Claude and his family.

Call the church office at 538-8552 for tickets and other information.

Suffolk Police Officer Corey Hubbard was honored Wednesday with the Hampton Roads Chamber Valor Award for his actions during a... read more