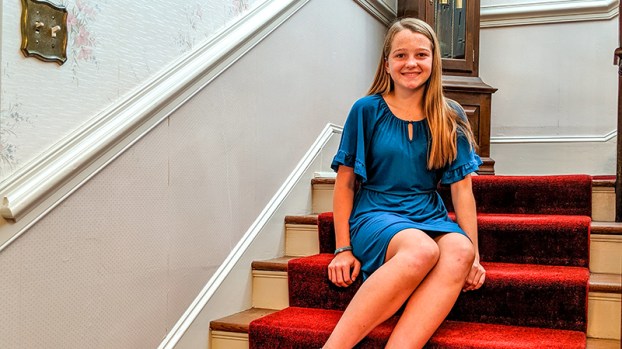 Thanks to her eighth-grade algebra teacher, Madie Baker had a unique opportunity last month to gain leadership skills in the nation’s capital.

Madie, who just finished eighth grade at John Yeates Middle School and will be a freshman this fall at Nansemond River High School, received a nomination from her algebra teacher, Richard Routten, to attend the Envision Junior National Young Leadership Conference in Washington, D.C. She said she was surprised by the invitation to the conference.

“I had no idea what it was, and I got a paper in the mail saying that he recommended me for it,” Madie said.

The conference was designed for high-achieving middle-schoolers across the U.S. to develop leadership skills as part of an academic and career-oriented development experience.

As part of the program, Madie, 14, heard from keynote speaker Anthony Robles, who was a three-time All-American wrestler and an NCAA national champion in 2011. She also experienced tours of popular spots in D.C., and got the opportunity to do a sleepover at the Maryland Science Center.

“I just thought it was cool that I got recommended out of everybody in my class,” she said.

Madie is already a high achiever, having taken three high school classes while at John Yeates — algebra, Spanish and Earth science — and playing JV field hockey for Nansemond River last season. She did this all while maintaining honor roll grades and taking dance at Allonge’ Dance Academy.

During her time at the conference, Madie took part in simulations designed to enhance leadership skills while solving real-world problems. In her group’s case, it was how to deal with mining in Antarctica. She took on the role of chief of staff.

“One was a day in the office, and we picked a president and a vice president, and everybody else in Congress,” she said. “We had a problem, and we had to fix it based on what our position was.”

She feels like the workshop helped her with her leadership abilities, as she describes herself as normally a quiet person.

“It’s a lifetime experience that she can learn from,” said her mother, Kelly Baker. “It definitely makes me proud that she was nominated among her peers. It shows her leadership in her classroom. Hopefully, she can take the lessons that she’s learned into her high school and college years.”

Next, Madie heads to field hockey camp, but she said she will treasure her experience as she prepares to begin high school.

By Stephen H. Cowles The Tidewater News A Virginia Beach man has been charged with the first-degree murder of a... read more