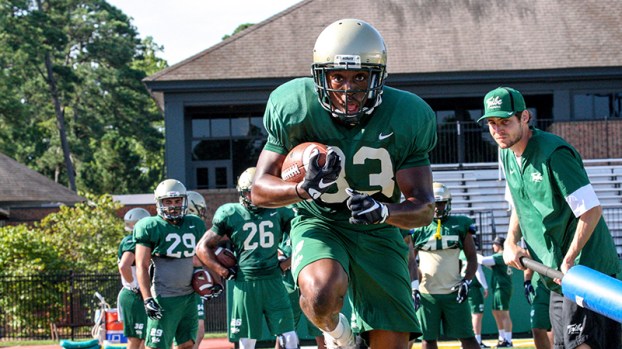 Last March, Giles tore his ACL after coming off of his redshirt sophomore season. During that season for the College of William & Mary, Giles appeared in 11 games, starting five of them.  He finished with 339 yards on 55 carries with two touchdowns. It was quite a strong year for the NSA native. However, during the following spring, Giles suffered a setback with his injury.

Giles went on to miss the whole 2018 season having to rehab and deal with his injury. Now, Giles feels he is in a good place and excited about the season.

“I feel pretty good about where I am right now,” Giles said. “The trainers and my coaches didn’t want to rush me back quickly, so my rehab plan was really thorough.”

Even though Giles sat out the whole season last year, it counted towards his eligibility, having already redshirted.

“I’m just looking forward to getting back around my teammates,” he said. “Being injured for so long, you really don’t get to do the things that non-injured people are doing. You’re either rehabbing or working out at other times. Just being able to get back out there and have fun, doing what I’m passionate about with my teammates.”

Giles felt good about how the spring workouts and practices went for him. He was able to do pretty much everything on the field except full-contact drills. With camp coming in the next week or so, it’s likely he’ll return to full contact then. As he makes his way back, Giles is confident he can get back into the running back rotation.

“With the new offense we have, we use a lot of running backs. So, I think I could make my way back and do some good things.”

In his time at NSA, Giles helped the Saints win a state championship. He was the state Offensive Player of the Year as a senior, rushing for a school-record 2,042 yards and 28 touchdowns. Also, during that 2015 season, he took home the Suffolk News-Herald Fall Male Athlete of the Year award.

Nichols looks for another level

Former Lady Bulldogs standout Cydney Nichols is looking forward to taking her game to the next level as a junior.... read more