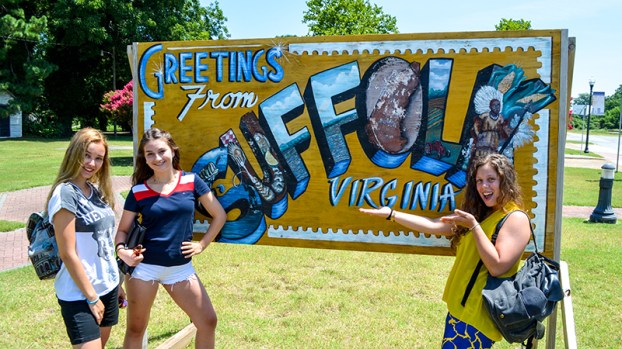 Three teenagers from Italy have been experiencing American life in Suffolk for the past week, and on Tuesday these ladies got a tour of historic downtown.

Persons took the teens to the Planters Peanut Center downtown and also the Suffolk Seaboard Station Railroad Museum. They drove past the Planters factory, then headed to Sentara Obici Hospital on Godwin Boulevard and the Obici House in North Suffolk.

It was important for the group to learn more about Amedeo Obici, the founder of Planters Peanuts and Obici Hospital, and the man who linked Suffolk with the Italian city of Oderzo, the place of his birth.

“This is our time for them to see our town and also understand the link between our two cities,” Persons said.

The nonprofit network currently unites tens of thousands of citizen diplomats and volunteers in nearly 500 member communities, with more than 2,000 partnerships in more than 140 countries, according to sistercities.org.

The Suffolk chapter began its program in 1981 with Suffolk County, England, and in 1995 added Oderzo.

Suffolk Sister Cities selected one Suffolk teen to be this summer’s student ambassador in Italy, and he is expected to return next week. Sara, Linda and Alice arrived at Norfolk International Airport last week — Alice and Linda on the evening of June 24, and Sara on Thursday evening because of exams.

Alice and Linda were welcomed with fried chicken, cornhole and more at a welcoming supper held at Glebe Episcopal Church on the evening of June 26. Members of Suffolk Sister Cities and Suffolk City Council were there to greet the new arrivals.

Alice admitted that it was a bit overwhelming, at first, with so many people that she didn’t know waiting for them.

“We were a little scared, because there were a lot of people that we didn’t know,” she said.

They’ve spent most of their time in Suffolk immersing themselves in American culture, both in independently and as a group.

The teens have gained new confidence as they’ve gotten more comfortable with their host families — and with strangers in packed rooms like at last week’s welcome party, which Alice said ended up having a fun, friendly and comfy atmosphere.

On Friday, Sara and her host sisters joined Alice and Linda for a Norfolk harbor cruise aboard the Victory Rover. They then got to paint their own mermaids at the Mermaid Factory.

“We spent almost two hours there painting,” Sara said. “I think it was a nice activity.”

After spending last weekend with their respective host families, they took a trip to Jamestown and Williamsburg on Monday to learn more about the early years of the United States, along with Native American culture, Persons said.

Linda enjoyed how you could step back in time in Williamsburg, in a blend of modern and historic buildings and with historic reenactors dressed in full regalia from the 1700s. She recalled one reenactor in character as the Marquis de Lafayette. He even rode a horse.

“I really liked it, because I felt like I was in that age,” she said.

The girls also enjoyed spending time with their host families and trying out delicious new dishes. Linda went canoeing and jet skiing last weekend and enjoyed a meal at Plaid Turnip as well as she-crab soup in Smithfield.

Alice spent the weekend with her host sister, Sarah Meyers, and Sarah’s friends, watching movies and going out to the beach and on a boat. She tried restaurants like Taco Bell and Chipotle — she joked how Americans love to eat Mexican food — but her favorite food so far was the quesadillas made by her host mom.

Sara’s host sibling Kate made some amazing dinner rolls, she said, and Sara returned the favor by making pasta for her host family, complete with pesto she brought from Italy.

Persons said they were able to make special arrangements this year by putting the teens with Suffolk host families that had corresponding interests.

Linda, who does choreography and costume work for her theater company in Italy, got to go to the Wells Theatre in downtown Norfolk. Alice actually knew her host sister, Sarah, from when Sarah stayed with another host family in Italy as part of the program last summer.

Sara’s host family is a combination of retired military and relatives that are forensic scientists, which aligned nicely with Sara’s own interest in pursuing criminology. She said that her dream is to study criminology in London, then return to the U.S. to train at the FBI Academy near Quantico.

“Sister Cities is about developing relationships, and strong relationships can be built by finding common interests and goals,” Persons said. “This year was special because of the strong potential to develop or strengthen relationships based on common passions.”

The girls will return to Italy next week, but first they have plans like Busch Gardens rollercoasters and checking out the Outer Banks for the Fourth of July.

Sara will be with her host family in Eclipse for the Fourth to enjoy the annual bicycle parade, raft race and fireworks.