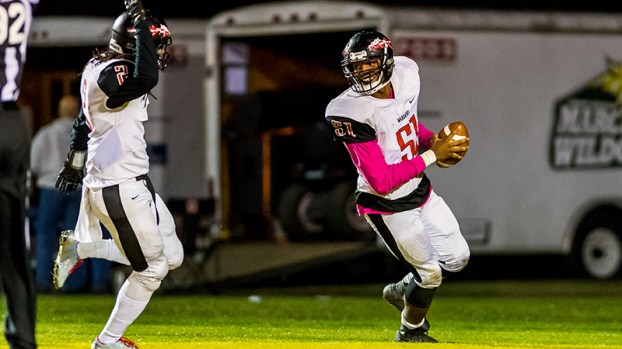 Datron Branch is one of five Warriors who competed in the All-Star game over the weekend. Branch is headed to Chowan University. (Sarah Murphy Photo)

The Warriors were the only Suffolk representatives, with Rashaad Williams, Datron Branch, JaQuelle Harrell, Derrick Hardy and Eric Chandler all getting a chance to compete for a little bit. The Southeastern/Beach team took the win 28-8, but the Warriors were just happy to get a chance to play with one another again.

“It was great,” Williams said, “just getting a chance to get back on there with my guys and compete.”

“It was an amazing feeling,” Branch said. “Nothing better than getting back out there and playing with my brothers one last time.”

Nansemond River had a strong season last fall, finishing with an 8-4 record. They advanced to the Class 5 Region A semifinals after becoming region champions and falling in the state semifinals back in 2017. Many of these standout Warriors had big seasons the past two years.

Williams was an All-District, All-Region and All-State selection. Harrell and Branch were also All-District and All-Region selections. Even though another strong class is going on its way, the Warriors are expected to be stronger once again next season. The graduates moving on feel they have set a precedent for how things are supposed to be done for the rising seniors and those under them.

Williams will head to Norfolk State University to walk on, and Datron Branch will head to Chowan University. The other three Warriors that competed are still weighing options.

Branch said he chose Chowan because he felt like that was the best place for him to go where he can focus strictly on school and football. Even though he was an All-District and All-Region offensive lineman, Chowan has plans of playing him at linebacker.

“Small environment there with no distractions is just right for me to focus on school and football only,” Branch said.

Overall, this group contributed a lot to the Warriors program the past couple years. And all of them enjoyed their team during the All-Star game last weekend.

“I’m going to miss those guys,” Harrell said. “It felt great to get a little workout in and make plays one last time with them.”

After redshirting his first year for the Pirates football program, Darran Butts is ready to hit the field. The... read more