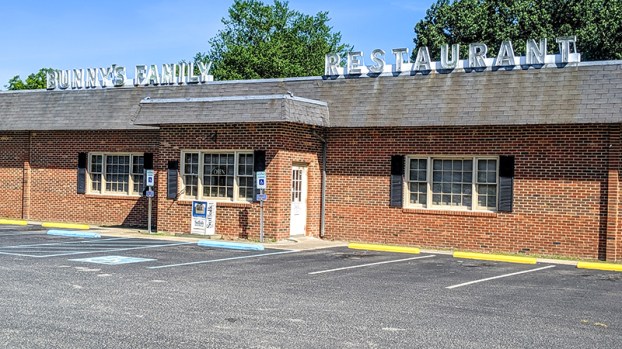 Bunny’s Family Restaurant, located at 1901 Wilroy Road, served its last meal Sunday and has closed after 60 years, according to signs on its doors and a posting on its Facebook page.

A popular local restaurant has closed after 60 years.

Bunny’s Family Restaurant, at 1901 Wilroy Road near U.S. Route 58, served its last meal Sunday, announcing that it had closed on its Facebook page. It also posted a sign on the doors to the entrance of the restaurant.

“Thank you! to all our faithful customers and friends,” the signs outside the doors to the business said, underlining the word “friends” and adding an exclamation point for emphasis.  “We are hanging up the aprons and are officially closed for business.”

The announcement of its closure has spurred an outpouring of comments over the closing, many expressing their sorrow over the restaurant’s closure while sharing memories of meals and good times with family and friends.

“It’s very heartwarming, and of course, it makes me sadder to not be able to take care of them anymore,” said owner Nell Evans. “But it’s the end.”

Evans said she decided to close the restaurant for financial reasons, saying it had become more challenging after her mother, Elizabeth Hingerty, died in 2001. Hingerty opened the restaurant in the early 1970s — 1971 or 1972, Evans said.

“We put everything we could scrape into it for the past 18 years … and we tried to keep it open,” Evans said. “But there was more going out than coming in.”

She said it was tough for her to tell her employees that she was closing the restaurant. She doesn’t believe customers were aware that the restaurant would close until the signs went on the doors and it was posted on Facebook.

In a Suffolk News-Herald profile of the family-owned restaurant in October 2017 — headlined ‘A second generation of Bunny’s’ — Evans noted that her restaurant life started when her mother opened Bunny’s, which was relocated on its Wilroy Road property when the U.S. Route 58 bypass was built.

The name, Bunny’s, came from a nickname Hingerty picked up while working as a waitress in Suffolk for years, according to Evans. Hingerty had pet bunnies and when she was late, she would blame it on them.

“She always gave the excuse that one of the rabbits got out, so they nicknamed her ‘Bunny,’” Evans said at the time. “Everybody in Suffolk knew her as Bunny.”

The menu, which featured country cooking, offered breakfast favorites such as hot cakes, bacon, sausage and eggs any way you liked, Evans said, as well as lunch and dinner favorites that included Brunswick stew, fried chicken and burgers paired with produce from the Evans Farms Fresh Produce fields next to the restaurant, which Evans’ son, Eddie Lee, oversees.

For many years, the restaurant hosted a group of former POWs and World War II veterans who had been a part of the Bataan Death March or had other postings in the Pacific theater during World War II.

They met at Bunny’s for breakfast on the first Wednesday of every month, and when the last of them died in 2011, the breakfasts continued, with crew members from the USS Bataan keeping up the tradition. The group expanded to include veterans of wars in Korea, Vietnam, Iraq and Afghanistan, and from all branches of the military.

Suffolk’s William and Sarah Blair sponsored the breakfast group since its inception many years ago. He initially picked up the tab anonymously, but after the group learned the identity of its benefactor, he began coming to its breakfasts.

On Suffolk Tourism’s website, it describes Bunny’s as a local favorite and “practically a Suffolk landmark” with “good Southern home cooking.”

It’s now a Suffolk landmark that has closed, and, judging from the comments to Bunny’s Facebook page, will be sorely missed.

Evans said she will miss it, too.

She plans to carry with her the memories of the nice, friendly people that ate at Bunny’s, some of them on a daily basis.

“It was very sad,” Evans said about closing. “But we’ll get through it.”

Bakers will face one another in a tasty competition when the “Cupcake Wars” begin at the Lake Prince Woods Retirement... read more